Deputy Tempe tries to solve three crimes that have occurred in the eerie Wilkinson House over the last eighty years. As Tempe is drawn into a battle of good vs. evil, she is confronted with a problem faced by many with cross-cultural backgrounds. What is the best way to recognize the truth? Is it her Indian traditions as represented by Nick Two Johns or Christianity as represented by her husband Hutch or some combination of the two? Link to buy book … END_OF_DOCUMENT_TOKEN_TO_BE_REPLACED Newly retired as a deputy, Native American Tempe Crabtree is called to help out an old friend who is suspected of murder. He and his wife have moved to an over 55 gated-community in Temecula, California. He discovered his dead neighbor and immediately became the prime suspect. The mystery involves some of his other neighbors, Old Town Temecula, the Pechanga Indians, the ancient oak, and Erle Stanley Gardner Targeted Age Group:: All audiences What Inspired You to Write Your Book? My … END_OF_DOCUMENT_TOKEN_TO_BE_REPLACED 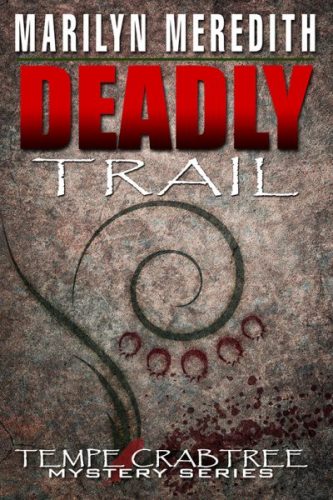 Deadly Trail by Marilyn Meredith Deputy Tempe Crabtree arrests fellow Native American Nick Two John at a protest against logging. He berates her for her lack of knowledge of her Indian heritage. When he becomes the major suspect in the murder of the owner of the local inn, she feels sure he is not the guilty one and she begins her own investigation. When someone tried to kill her, she knows she's on the right track. … END_OF_DOCUMENT_TOKEN_TO_BE_REPLACED 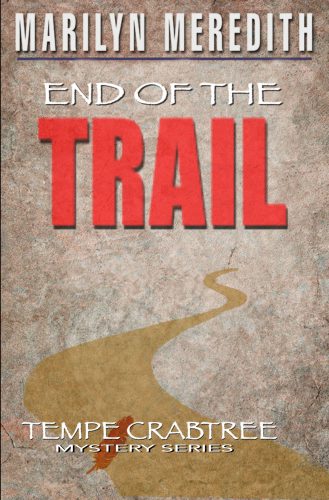 End of the Trail by Marilyn Meredith Tempe Crabtree is the resident deputy of the mountain community of Bear Creek. Volunteering to help find a missing hiker in the high Sierra leads to a murder investigation, an unhappy ghost, and a threat to her life. … END_OF_DOCUMENT_TOKEN_TO_BE_REPLACED