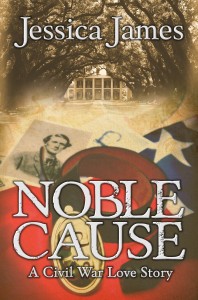 This book is bargain priced from 09/02/2014 until 09/16/2014 Winner of the coveted John Esten Cooke Award for Southern Fiction and often compared to Gone with the Wind, Noble Cause, tells the tale of Colonel Alexander Hunter, a dauntless and daring Confederate cavalry officer, who, with his band of intrepid outcasts, becomes a legend in the rolling hills of Virginia. Inspired by love of country and guided by a sense of duty and honor, Hunter must make a desperate choice when he discovers the … END_OF_DOCUMENT_TOKEN_TO_BE_REPLACED

I'm a forty-something woman, mother of a teenager (it's going better than you'd think), and a writer. I'm fairly boring as a person and spend much of my time alone, in front of my computer, thinking of clever names for characters or how to turn a conversation I overheard in Kohl's into an award-winning story. On the other hand, I do have two superpowers. The first, an uncanny ability to recognize people (usually actors) and explain where you've seen them before, is as truly awesome as it is … END_OF_DOCUMENT_TOKEN_TO_BE_REPLACED

Honor and conviction clash with loyalty and love in this epic Civil War novel that pits brother against brother. Winner of the coveted John Esten Cooke Award for Southern Fiction, Noble Cause chronicles the clash of a Confederate cavalry officer with a Union spy as they defend their beliefs, their country, and their honor. Called “a riveting piece of historical fiction” by the Midwest Book Review and often compared to Gone with the Wind, Noble Cause takes readers across the rolling hills of … END_OF_DOCUMENT_TOKEN_TO_BE_REPLACED