About Trana Mathews: Since there's an author named Diane Hildebrandt who writes reference books, I decided to use Trana Mathews as my pen name. My love for books has been constant throughout my life, though my choice of literary genre often changed. I love it when I just can't put a book down! After retiring to beautiful southeastern Arizona in 2015, I began researching and writing my family's history. This kept me busy and out of trouble, besides my third … END_OF_DOCUMENT_TOKEN_TO_BE_REPLACED 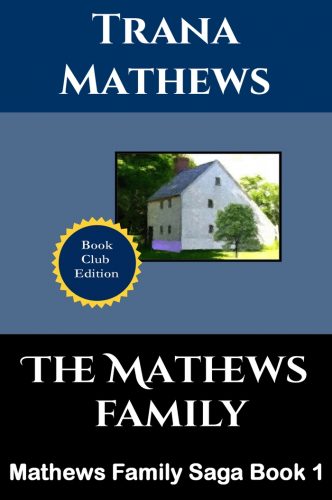 From their beginnings in the Massachusetts Bay Colony, their lives have been intertwined with American history. As a young child, Increase Mathews witnesses the birth of the United States. Along with his mother and siblings, he remains on the farm while their older male relatives join the ranks of the Continental Army. After the Revolutionary War ends, social and political unrest continues throughout central Massachusetts during the period known as Shays's Rebellion and a battle takes place … END_OF_DOCUMENT_TOKEN_TO_BE_REPLACED