Author Bio: Diana lives in the state of New York with her family. She has been writing for many years and trying out many genres, finally deciding to concentrate on writing the sorts of books she enjoys reading. This book is the first in her series of crime/thriller/mystery books set in the not-too-distant future. What inspires you to write? Wanting to read! I am a very fast reader and sometimes I used to get frustrated when I couldn't get to the library and my book buying budget was all … END_OF_DOCUMENT_TOKEN_TO_BE_REPLACED 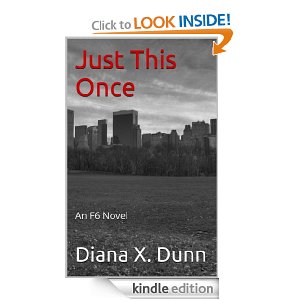 Adopted by an international multi-governmental agency that doesn't officially exist, her only genuine identity is "F6" - the sixth female baby adopted into the program. Now she changes identities as often as other women change their shoes, moving through the world completing top-secret missions and keeping her distance. A chance meeting with a handsome stranger tempts her to lower her guard. A second encounter turns up the heat until he finds himself in the middle of a murder investigation … END_OF_DOCUMENT_TOKEN_TO_BE_REPLACED