You are here: Home / Fiction / Table for One by Daniel Kelley 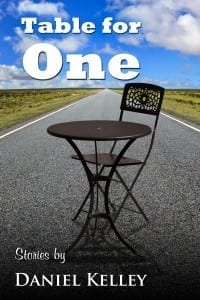 Ah, the pleasure of temporarily inhabiting characters imbued with so many of the flaws that most of us strive to hide. Five stories, involving well more than five problem customers.

Milo Steddiman, a disgraced business titan, revisits his childhood town of Lincolnsville in “Full Circle”, only to discover that the years spent away haven’t exactly erased the traces of personality he’d left years before.

In “A Summer Tale”, Miss Dori sees a familiar-looking man in a barber chair, and is flooded with memories of a rapturous summer decades before. Could this actually be Franklyn, who’d loved and left her, who’d stolen her heart and soul before departing her life?

A husband takes the plunge and informs his wife of feelings he’s developed for another woman. Being straightforward is such an admirable trait! The conversation, however, definitely does NOT go in the direction he had hoped. Such is his reward for “Honesty.”

Unlike Miss Dori, Catherine actually found the man of her dreams in Thomas Gardiner Huntley. And then they got married. Years later, Catherine is completing a “Jigsaw Puzzle,” her primary ‘allowed’ hobby, and she reflects on how her choices resulted in such an intractable situation, and what she can do to end it.

And to round out this 23,000-word collection of damaged goods, “Original Owner” opens a window into Gerald, who’s been chucked by girlfriend after girlfriend. For Gerald has a problem with those who have come before him romantically. And as he’s discovered with much agony, there’s not a damn thing he can do to alter the past. Or his obsession with it.

An enticing group of stories! There’s nothing quite like being both horrified and relieved by experiencing through words how those tricky blemishes in our own personalities could have altered our lives….

Daniel Kelley is a short story author and a music arranger. Over 500,000 books of his compositions and arrangements have been sold worldwide. With lyricist JoEllen Doering, he composed the music to the classic holiday song, It’s Christmas Time Again. Daniel also mosaics, makes candles, and enjoys spinning platters on his Victrola. He and his wife Cynthia have three children and too many fish. Adair, Darcy and Adele are the names of the children.