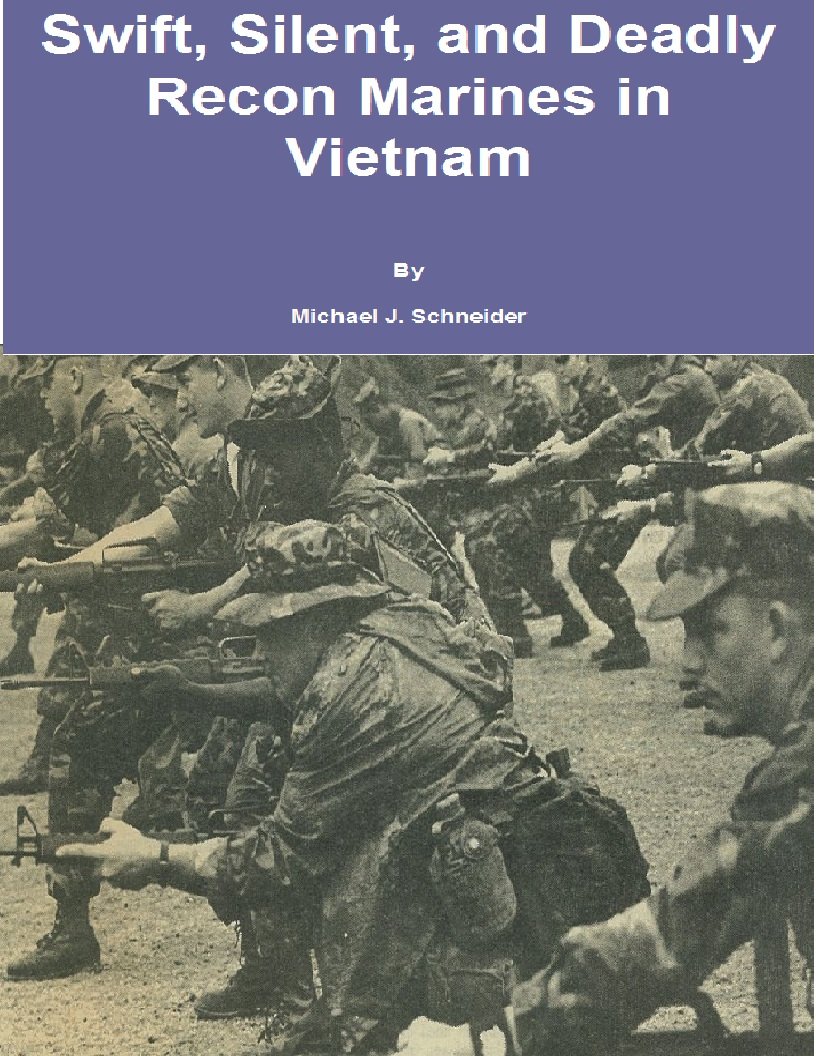 Imagine being one of a 7-man team in the middle of a jungle where any person you might encounter will try to kill you. This is enemy territory, inhabited by an unknown number of enemy combatants. You might encounter 1 or 2 of the Viet Cong or North Vietnamese Army or just as easily 50 or more. In addition, there is the danger of man-eating tigers and poisonous snakes!

Your mission is to find the enemy without them finding you. You are to report their position so that artillery batteries, bombers or helicopter gunships can destroy them without risking the lives of infantrymen in a hazardous jungle assault. You must keep quiet lest you be detected. The brush is so thick it’s hard not snap twigs or crunch brush. You find a trail; but you can’t walk on it because it may be booby-trapped with land mines. What sort of men would willingly undertake such a mission?

Swift, Silent & Deadly tells the story of Recon Marine heroes in Vietnam. Many of the men covered in the book are no longer with us. Some were casualties of war. Others just haven’t survived the years that have passed since the end of the war. There are still plenty around to tell their story, however, and some of those are included in this book

What Inspired You to Write Your Book?
In a January 2005 article in the Washington Post, researchers Mark Bauerlein and Sandra Stotsky cite studies that indicate a widening gender gap in young adult reading. Boys are lagging behind girls. The following excerpt from the article suggests a probable cause:

“Although one might expect the schools to be trying hard to make reading appealing to boys, the K-12 literature curriculum may in fact be contributing to the problem. It has long been known that there are strong differences between boys and girls in their literary preferences. According to reading interest surveys, both boys and girls are unlikely to choose books based on an “issues” approach, and children are not interested in reading about ways to reform society — or themselves. But boys prefer adventure tales, war, sports and historical nonfiction, while girls prefer stories about personal relationships and fantasy. Moreover, when given choices, boys do not choose stories that feature girls, while girls frequently select stories that appeal to boys.

Unfortunately, the textbooks and literature assigned in the elementary grades do not reflect the dispositions of male students. Few strong and active male role models can be found as lead characters. Gone are the inspiring biographies of the most important American presidents, inventors, scientists and entrepreneurs. No military valor, no high adventure. On the other hand, stories about adventurous and brave women abound. Publishers seem to be more interested in avoiding “masculine” perspectives or “stereotypes” than in getting boys to like what they are assigned to read.

At the middle school level, the kind of quality literature that might appeal to boys has been replaced by Young Adult Literature, that is, easy-to-read, short novels about teenagers and problems such as drug addiction, teenage pregnancy, alcoholism, domestic violence, divorced parents and bullying. Older literary fare has also been replaced by something called “culturally relevant” literature — texts that appeal to students’ ethnic group identification on the assumption that sharing the leading character’s ethnicity will motivate them to read.”

Based on this assessment, Swift, Silent and Deadly should be quite attractive to the young adult male.

How Did You Come up With Your Characters?
I served with the 1st Reconnaissance Battalion, 1st Marine Division from October 1969 to December 1970 in Vietnam. Some of the men in my book served with the 1st Reconnaissance Battalion. I got information on other characters from extensive research, including some telephone interviews. I researched all of the characters.

About the Author:
I was born and raised in Omaha, Nebraska. At the age of 18, I was eligible to be drafted as the Vietnam War was at its peak. I chose instead to enlist in the U.S. Marines. I spent 14 and 1/2 months in Vietnam with the 1st Reconnaissance Battalion, 1st Marine Division. My period of service was from October 3, 1969 to December 13, 1970.