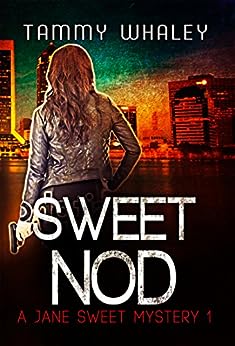 When a conservative Senator dies in a kinky scene at a sleazy hotel, Jane Sweet is put on the case. Soon the bodies begin piling up as she and her partner, Shelby Dimitri, search for a killer that seems to be one step ahead of them. Fighting her own personal demons, Jane wonders who she can rely on when evidence is planted to point her way. Someone is searching her desk and using every means possible to monitor Jane’s progress in the case. They forgot one thing though, her reputation; everyone knows that Jane Sweet is a crazy bitch.

What Inspired You to Write Your Book?
I have enjoyed stories where the main character is less than perfect. To me, this made them seem real. During the college courses I took for both my Law Enforcement/Corrections and Registered Nursing degrees we were warned about the high rate of addiction suffered by members of both professions. As a nurse, I have frequently dealt with people who suffer with addiction. While some medical professionals may only see the addict, I try to see the person underneath the disease.

How Did You Come up With Your Characters?
I have known many strong women and try to insert their strength into my characters. The weakness Jane suffers is hers alone. Shelby is based on the people I have run across in my life that are absolutely certain life revolves around them.

Book Sample
Prologue
The man tied to the bed was dead and didn’t know it. He was lying spread eagle on the iron four poster bed with a ball gag in his mouth and his flagpole standing at attention. More like a flag stump, but it was what it was. His heart was pounding in his chest as the promise of what the woman would do to him grew. She had been in the bathroom for a long time, hopefully she hadn’t left him like this.
A trickle of sweat rolled down his brow, toward his ear. God, he could just see the headlines if a maid found him like this tomorrow morning. Conservative State Senator found in local hotel bondage scene. Any future bid for the White House would end there. He’d lose it all, the ugly rich wife, the pretty little mistress, the free golf vacations to the Caymans. The minute the story hit the stands he’d have maybe thirty-six hours to clean out his accounts and get out of the country.
When the door to the bathroom opened, he breathed a sigh of relief underneath the ball gag. The woman had put on a leather mask and taken off everything else. In her right hand she held an old fashioned bullwhip that she was casually swinging back and forth. Picking up the remote control to the television with her left hand, she turned on the TV and tuned it to an erotic movie. She turned up the volume on the set to a barely acceptable level. Although, anyone that used this hotel probably wouldn’t complain.
The Senator writhed on the bed in anticipation of the games to come. Slowly the woman ran the whip across his skin, allowing him to take in the scent of the fine braided leather. Teasingly she lashed out, causing a small, pleasurable sting. Shivers ran down the man’s spine as he awaited her next move. Slowly the woman built him up just to the edge. Finally, when he was certain he could take no more, she straddled him, grabbed a pillow and placed it over his face.
At first he thought it was just an extension of the games they were playing; a kind of autoerotic asphyxiation. Then, when she failed to lift the pillow, he knew it was real. Struggling against his bonds, he bucked and twisted, trying to get away from the pillow that was so effectively blocking his airway. Finally, he began praying. Begging God to forgive him. Promising he would do anything and everything if only he was allowed to live. Suddenly, like someone flipped a switch, he was calm. He thought about how in the old vacuum tube television sets the picture would fade down to one point of light before extinguishing when turned off. That was what he was experiencing now. The light shrank to the size of a pinpoint and then faded to black.
The woman returned to the bathroom and dressed. Using a towel, she wiped down every surface she had touched. Leaving the bullwhip on the bed she scanned the room for anything she may have unintentionally dropped. Now that the kill was done, she was exhausted. She had just one more task before leaving. Removing a tape covered strip of plastic, she carefully placed the plastic against the door jamb at the room’s entrance. She rubbed lightly, then put the tape back onto the plastic and placed it into her pocket. Satisfied with a job well done, she exited into the cool, Cleveland night.

Ginny O’Mally had been the caretaker for the Riverside cemetery for fifteen years, since her husband, the previous caretaker, had taken a header into an open grave and broke his neck. She would’ve felt bad for him, but the mean bastard was coming home from a three day drunk when he had his accident. Since she had done most of the work for him anyway, the company let her take his job. Most people backed away from working in a place filled with the dead, but not Ginny. She liked her job. She tended the graves, mowed the grass and directed loved ones to the proper gravesite. It was quiet and she set her own pace for doing things. Most days you didn’t have to talk to another person. You could just do your job and go on.
Driving the lawn mower between the rows of tombstones, Ginny found her thoughts drifting, not landing on any one particular subject. The hum of the mower, the cool morning air and the warm sun beating down on her face worked together to put her into a Zen-like state. If running over a rock hadn’t caused enough racket to bring her out of her reverie, she would have mowed right over the girl’s outstretched leg. Swerving, she bumped into a large marble gravestone on her left, overcorrected and hit the one just inches from the girl, on her right. Finally she straightened the mower and cut the engine.
Hands shaking as she pictured what could have happened, Ginny sat for a few minutes to calm down. Climbing off the mower she warily approached the body lying behind the tombstone. The girl was pale and skinny, splayed out on her back. Ginny didn’t want to touch her, but she needed to check for a pulse. Nudging the woman with a toe, she yelled, “Hey!” and received no response.
Reaching down with her right hand and touching the woman’s neck, she jumped back three feet when the woman’s eyes opened. “Arrgh!” Ginny screamed.
“What, where am I?” the woman asked.
“R-r-riverside cemetery.” Ginny replied.
“Oh.” the girl replied, reaching out to lightly touch the gravestone at her head.
“What are you doing here?” Ginny demanded, more annoyed than scared now.
“I’m” before she could answer a cell phone rang. Holding up a finger, the woman took a phone out of the inner pocket of her brown leather jacket and tapped the screen. “This is Sweet.”
After listening for a minute she replied, “Yeah, I know where that is. Look I need you to come get me. I’m at the cemetery.”
The voice on the other end of the line got loud enough for Ginny to hear. The girl cut her off, “Just come get me, I’ll wait by the front gate.” pushing herself to her feet, Sweet brushed the freshly mown grass off of her clothing and said to Ginny, “Sorry about that. I am usually out of here before you come through in the morning.”