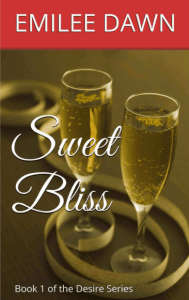 Emilee figured she may as well give up. Why even bother. She was just meant to be alone for the rest of her life. She could not hold a steady relationship with anyone. Nothing ever worked out in her favor. They wanted a lot more than what she could give their relationship. Some way, somehow, men were not meant for her. Maybe if she swung the other way she wouldn’t have this much trouble. She was sure that lesbian’s had more fun than she did when it came to the dating category. She was hopeless. Completely hopeless!
That was until Evan came into the picture. He made her feel things that no other man had never made her feel. He did things to her that she had only read about in books. She was completely and utterly…confused!
Evan touched her body in ways made her instantly heat up inside. His tongue caressed and enticed her until she couldn’t think straight, until she was nothing more than a hot mess in his arms, until he made her come over and over again just because he could.
Yes, that was Evan, one who had her just where he wanted her, at his disposal. He did whatever he wanted to her, whenever he wanted, and wherever he wanted without regard to where they were at or who was around. No matter what!
It took Emilee a while to grasp her mind around it all, but when she realized the kind of person Evan was. She realized that she couldn’t stay with him, couldn’t be with him. She couldn’t put herself through it.
She couldn’t not be with him either. Emilee couldn’t stay away from him. She couldn’t live without his touch, his warmth, his breath on her, his hands holding her close, his tongue exploring her body. She couldn’t make herself do it. He made her weak.

What Inspired You to Write Your Book?
I have always wanted to be a writer and have written from a child on up. Writing has been a passion of mine that I finally made happen through self publishing.

How Did You Come up With Your Characters?
The characters in this book were based on group of friends in their normal, everyday routine. I wanted a twist thrown in and one man was all it took to change the whole spectrum of things.

Book Sample
“Emilee, I…” his voice trailed off as he looked down into those radiant green eyes and slid his fingers down a strand of her hair that hung loosely on her shoulder. He couldn’t help himself. He wanted her. He wanted to taste her and to see what her lips felt like on his. He slowly dropped his head closer to hers. “I want to kiss you right now,” he said so very close to her mouth in a voice that said he wanted her.

About the Author:
Wife, mother, teacher, and now writer. A life long dream has come true for me. I am always busy and have always loved to read. Now, when I have a spare, I’m writing, my life long passion. It’s been a dream come true. My heart and soul are in this book and I hope to bring you many, many more.