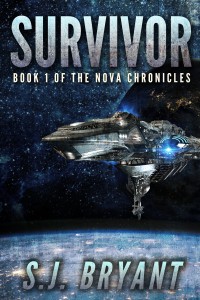 When everyone runs, who will stand?

For eons a dark force has lurked inside Archalon, waiting.

In 2354 the Confederacy set it free. Now the alien uprising is imminent and there’s only one person left to stop it.

Nova goes where others dare not. She shoots first, talks little, and carries a chip on her shoulder the size of Boullion 5. Her reckless courage is all that stands between the Ancients and the annihilation of the human race.

Fear the hero who has nothing left to lose.

What Inspired You to Write Your Book?
I’ve always loved Tomb Raider and Doctor Who, and a few years ago I started thinking how cool it would be if the two combined… and so The Nova Chronicles were born.
I had an idea for a Lara Croft type character who would travel space like the Doctor having adventures, and then for good measure I threw in some space western characteristics reminiscent of Firefly.
The story soon took on a life of its own and has grown into a vast universe with life or death stakes and a wide cast of very different characters. Still, at its core, it’s still Tomb Raider in Space.

How Did You Come up With Your Characters?
The main character, Nova, was loosely based on Lara Croft from Tomb Raider – I always loved her tough-nut attitude. But her companions stem from a whole range of places. Her companion robot was not (despite what some people think) based on Hal from Space Odyssey. He was always going to be a quirky companion with some elements of Marvin from Hitchhiker’s Guide, but not quite so depressing.
The other bounty hunters are loosely based on video game characters, and other people I’ve read about, but mostly they came to life on their own as Nova’s story progressed.