The outbreak started in New York. Within days the infection had spread to every corner of the world. Nowhere is safe from the undead…

Bill watched from his window as London was evacuated. His leg broken, he is unable to join the exodus. Turning to his friends in the government, he waits and hopes for rescue. As the days turn into weeks, realising inaction will lead only to starvation and death, his thoughts turn to escape.

Forced to leave the safety of his home he ventures out into the undead wasteland that once was England, where he will discover a horrific secret.

This is the first volume of his journal. 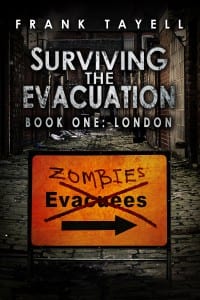 What Advice Would You Give Aspiring Writers?
Carry a notebook everywhere you go, makes notes about the things that you see and practice describing the world around you. Only you know when your book is finished, and it is not finished until then. Listen to constructive criticism and ignore the rest. Write for yourself and for as long as you’re enjoying it.

Author Bio:
The series “Surviving The Evacuation” focuses as much on the political aspects of the end of the world as it does on any individual tragedy. I wanted to explore how governments would turn to rationing, curfews, martial law, executions, piracy, murder, war and other extreme and otherwise unthinkable measures in a desperate attempt to prevent the collapse of civilisation.

Then, I wanted to explore how survivors would band together, how new communities, and even new nations, would be formed in the aftermath. How would ordinary individuals react and cope? In an overcrowded island like Britain, with few firearms, with no reserves of food, with no aid coming from anywhere and nowhere left to run to, is survival even possible?

Accompanying the novels are a set of stand-alone novella’s and short stories describing how people not normally thought of as hero’s and protagonists face the outbreak, the evacuation and its consequences. The first, “Zombies vs The Living Dead” tells the tale of the residents of a retirement home, abandoned to their fate as the nearby villages are evacuated. It is a simple story of the choices we make for love, in the face of almost certain death.