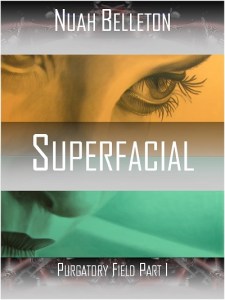 As the poet once said ‘the price of comfort is meaning’ …and identity.

Change your face, your body, your gender. All in minutes. Just choose your new look from whatever catalog you can afford today.

No names, just mnemonic chops. After all, what is a name – and what would be the point anyway?

A rising star in one of the Citadel mega-corporations. Singled out, offered the promotion of a lifetime.

Or is it just what HR would call ‘expedited redundancy’? Is he their new young gun or cheap cannon fodder?

Now the only way home is to survive Outside – a place where the professionals ask for triple pay and death benefits. With no experience and no contacts, there’s no hope. But maybe there’s something they missed, a raw talent, a wild card. One thing’s sure – if he does get back he’s not going to be the same…

What Inspired You to Write Your Book?
An image – a classic Sci Fi painting of a floating city in the distance. Beneath it a barren desert. A lone figure trudging through the dust, approaching the island of light.

From there I had a movie start in my mind which turned out to be the climactic scene in Superfacial.

How Did You Come up With Your Characters?
A little auto-biographical in some places. When I see someone do something that sticks in my mind I will try to remember that and then extrapolate that into a new character.

Her face – her beautiful unique… A blush of dawn filtered through his eyelids, patterns of light and dark swaying in bronze tinged gloom. The movement of leaves. Low down in the corner of his vision his bodyclock appeared, sharp and clear. Keeping his arms at his sides to preserve the illusion of space he drew a long breath, invigorated by the scent of moist loam and clean rain.

He stayed just as he’d woken, eyes closed, reveling in somnolence and rising excitement as his patchwork fed him breakfast, internal synthesis re-balancing and replenishing nutrients and devolving waste toxins. The pure spirit of his favorite flavors and textures rolled over his tongue, pressed against his teeth and palate, tantalized his nose like culinary music.

As he stirred a soft sparkling began to dance in the outermost periphery of his vision, each tiny nova denoting a continuous stream from someone interesting.

The minuscule lights blazed as their popularity soared, then dwindled away like dying suns as attention waned.

His own social status was there, just above his bodyclock. High eighties in pop and almost ninety in cred. Very healthy. He smiled, imagining his own star burning bright in the eyes of countless others.

Well, maybe not countless. The number was always there if he cared to look. One million, two hundred and seventy eight…oh-ho, wait for it…seventy nine thousand, to be exact. Okay, so not a lot, but that would change very soon.

There was one light that remained steady. A tiny subliminal counter displayed the number nineteen. Had he opened it that many times? It was the first time Corporate had ever communicated with him. To think of the discussions that must have occurred at the highest levels, all about him. After all, they didn’t make this sort of decision lightly.

After all it was only another credit. He focused and let the message unfold once more. The counter ticked over to twenty.

Attention: Re Project p#2308820893011
Based on profile and performance indicators you have been reassigned as Agent, Class E-X.
Report to HQ for briefing and Delta patch-kit allocation at [+0.08d].
Position Description: (classified)

Not exactly the warmest promotion offer, but an Agent. He liked the sound of that. E-X had a nice ring to it too. And a Delta patch-kit. Even the details of the position were classified.

This was his doorway to a new life. The message collapsed back into its star.

He felt the warm sun on his face as he let the outside world in, just a little, gazing unfocused through the blur of eyelashes. Everything was shot through with bright lines and soft shapes of green as if he really were lying under swaying boughs. For another moment he relished the attention to detail the scenic-artists had put into their work, then he opened his eyes.

Golden light rippled across the glade as the sun climbed though the branches, heralding another perfect morning. A dappled movement caught his attention.

The beautiful doe picked its way through the undergrowth. It wandered over to the grass he lay upon and began snuffling. A long ear twitched at a lazy butterfly. The forest was so peaceful he could hear the animal start cropping the soft green.

He’d put his big announcement up the instant he’d found out. Even better, he’d been among the first ten million to add their 247 social-feed to the upstart Vom.out and right now that was the Next-So-Thing. So-Spire, So-Gen, So-whatever. The ‘what’ didn’t matter, it was the ‘So’ that meant everything. More attention by default and a bigger audience even if you did nothing. Now everyone was crawling over each other to buy the low idents so they could show how they’d been there at the beginning.

He thought about risking a non-generated update. His automates blended millions of simultaneous inputs to create the perfect combination of tone and content that was so much more him than anything he could reasonably expect to produce.

Then again, why not try?

He cast about for some worthy and interesting tidbit. You lived and died by those two measures and his sociophants could be a savage and fickle lot when fed something uninteresting, or worse, unworthy. Everyone still remembered the Irony Wars of minus-two, or was it minus-three now? Anyway, no one wanted to go there again. Sticking to auto generation for social interactions was best and safest for all.

Still, if not now, then when?

He’d pre-celebrated, splashing out on an original scenic – No.654,223 of just one million Limited Edition prints. He looked around, impressed again by the level of quality. Cheap scenics looped or glitched, had no olfactory or only appeared when you focused just right. Not this one. No trace of his hometube showed, even when he whipped his head from side to side.

He chuckled as the doe reacted, springing off and disappearing into the undergrowth. He was cheating a bit, he knew this scenic was trending. He shut his eyes, sending out his high rating and recommendation, gift-wrapped in contentment.

The silent hiatus was bound with delicious trepidation, even though it lasted barely seven seconds. Then the backwash of opinionated critique started – up, down, fabulous, shit, flat-line, meh, could go either way. It was the thrill of balancing on a knife edge – infinitely thin and therefore ultimately sharp when it cut.

He let out his breath as the level of approval settled and rose. He wondered how much of that was his own PR-app telling him what he wanted to hear, but then shook his head with a smile. Positive Reinforcement was an important part of a Healthy Attitude even if it was bought and paid for, and if you couldn’t tell then it didn’t matter.

For another moment he enjoyed the sounds of the breeze and the birds in the trees. Then he turned the scenic off rather than risk bumping his head, and the smooth white cocoon that was his home reappeared around him.

He was really looking forward to looking back. In a year or two (or less), he would have moved so far Up and In that this place would widen the eyes of his amazing new friends, whoever they might be, with the humbleness of his beginnings.

Stretching to dispel the remnants of sleep he pressed both upward-curving walls until they creaked, then relaxed and flopped with a sigh. Then he chose his face for the day from the catalog parading across his mind’s eye.

He wanted something different. A new look for his new life.

Those cheekbones…maybe…oh wow, those lips…Nubian-prince, perhaps? No, not this time, way too expensive.

There it was. Number 63782. That jaw-line was a work of art and he could afford it for at least a week. Just. And money was about to become much less of an issue for him so – why not. He placed his order and felt the faint tingling pressure as his features began to shift. He looked down at his arm, watching the pale skin darken to a honey-brown glow. The thicket of scented chest hair retracted back into their follicles, leaving his body smooth and supple.

His smile deepened and he chuckled under the weight of his good fortune. Today was his big day. Opportunity had chimed and he’d been the right guy in the right place to answer when it did. Even the best spent five years or more working for a break like this, but the company was growing too fast for the luxury of experience.

Anyway he’d always believed in cockiness over substance. After all, what’s the worst that could happen?

About the Author:
Nuah Belleton is an Australian Writer (barely), Physicist (a long time ago) and Data Scientist, currently breaking ground in the burgeoning field of Predictive Analytics.

When he saw that Graeme Simsion had successfully combined his technical and fiction writing Nuah decided to publish his first book – Superfacial: Part I of the Purgatory Field series.

Part II (Prodigal Star) is scheduled for release in April.

As a technology optimist Nuah enjoys the fast pace of change and the ever widening scope of human endeavor, even as it makes writing Sci-Fi that lasts all the more challenging. Still, William Gibson did it so it can be done.

As part of writing this book he spent a lot of time studying a range of subjects, from neuroscience to how it might be possible to create buildings 10 kilometers tall.

He is married to a talented artist, whose work graces the front cover – probably the best part of the book.

He is current working on the Purgatory Field series as well as a ‘How To Guide’ for implementing Predictive Analytics in the Energy Industry.

He lives in Adelaide, South Australia with his wife, step-daughter, two cats and a labradoodle. The older cat enjoys typing with all four paws, especially when Nuah is trying to write.

Links to Purchase eBooks
Link To Buy Superfacial On Amazon