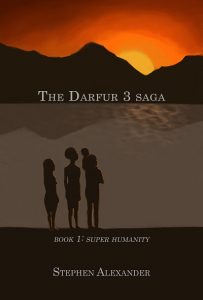 A schism between 2 great superheroes on the battlefield of Tora Bora leads to superhumans fighting in the wars over Darfur. Now it is the year 2012, and the young heroes of that war face their greatest challenge yet: going to America for hero training. Are they ready for America? Is America ready for them? Will they become the heroes America and Darfur need them to be?

What Inspired You to Write Your Book?
I thought long and hard about how superhumans would be deployed in a modern society. For many years, I've read books that followed the 'hero' model. Which is fine in a more 'stable' society like the West. But what about the lawless battlefields of the third world? This is where my characters come in, in the space where morality meets the genocidal battlefield.

How Did You Come up With Your Characters?
I always liked the idea of dueling heroic philosophies but I needed a way to show the reader as many potential circumstances without bogging down the scene. I wanted a superhuman born a human, a superhuman misused, and a superhuman turned sociopathic by the horrors of war. I put my characters through the rigors of the Darfur war, then introduced them to the soft pampered heroes of the West.

Book Sample
“I’m making my move. Back me up,” ordered Shadow of Vengeance. He jumped down, bending and rolling on the floor like a parkour athlete. Doctor Deceit didn’t hear the landing sound over the noise of his machines, but he did turn as Shadow was standing up and GASP! He saw the hero draw his tonfa batons.
“Damn! An annoying hero!” he yelled.
“Get down on the ground, or I will put you there, permanently,” ordered Shadow as he took a few steps towards Doctor Deceit.
“Doctor Deceit bows to no man! Besides, I have more than enough minions to defeat you.”
“All I saw were two guys. That’s barely a morning workout for me,” bragged Shadow.
“Who said all I had were two? Look behind you, foolish hero!” he pointed and forty people had just stood up and were running towards the hero. “My zombies will defeat you!”
Shadow ran towards the group, and swung his batons, hitting their heads and bodies, taking down mindless minions left and right. He spun to avoid a tackle that instead hit the laser bench. “Help me, guys!” Shadow shouted as the minions surrounded him.
“No. We’re scared of zombies,” said Jamir, unconvincingly.
“Yes, they’re too scary,” said Soad, almost mockingly.
“DAMNIT GUYS THIS IS NOT- UGHGH!” shouted Shadow. He was quickly tackled, smothered, and stomped on by thirty minions. Doctor Deceit waved his right hand up as he walked to the unconscious hero, and the minions stopped their brutal assault. Shadow dropped his tonfas as they held him up by his arms, while he kneeled on the ground.
“You never stood a chance. Minions, take him to the office and tie him up,” ordered Doctor Deceit. He then looked up at the Red Masks. “Why don’t you come down here?” asked the Doctor. “Or would you prefer I send my men up there to toss you down?”
The Red Mask team floated down and the minions moved out of their way. After they landed, Soad spoke first.
“We represent the government of Darfur and South Sudan. We’d like to make you a deal- asylum, for your technology.”