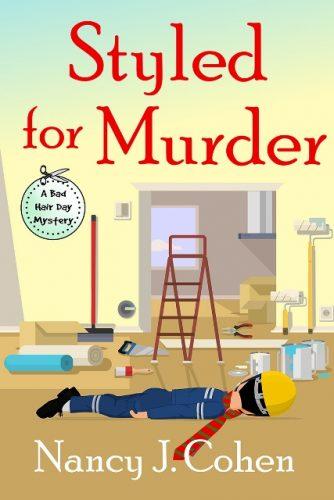 Hairstylist Marla Vail flushes out a killer when murder disrupts her mother’s home renovation plans in this stylish cozy mystery.

When hairstylist and savvy sleuth, Marla Vail, gets a frantic call from her mother that there’s a dead body in her shower, Marla realizes this wasn’t part of the home renovation plans. The victim turns out to be the project manager, who had an untrustworthy reputation in town. Disgruntled customers, unpaid suppliers, and the design company’s staff are among the suspects. Which one of them wanted the foreman to pipe down about their shady dealings?

Meanwhile, the lead investigator sets his sights on Marla’s stepfather, Reed, who’s keeping secrets from his family. Reed has a past connection to the victim and won’t come clean about what he knows. As Marla drills deeper, she’s showered with suspicions, but nobody’s willing to leak any information. She needs to hammer down the prospects, or time will drain away and the murderer will strike again.

To flush out the culprit, Marla taps into her pipeline of resources. Can she assemble the clues and demolish the alibis to nail a killer? Or has someone designed the perfect murder? Recipes Included!

What Inspired You to Write Your Book?
Home renovations can be murder… and I wasn't happy with our design company's foreman. So I killed him off in this book and created suspects around the project manager. Many of the complaints from customers in the story were ones I'd experienced myself.

How Did You Come up With Your Characters?
Suspects include shortchanged suppliers, irate customers, disgruntled employees, and resentful relatives. The main characters are Marla and Dalton Vail. Marla is a South Florida hairstylist married to a homicide detective. In this story, they have a ten-month-old son.

Book Sample
“May I ask how long it’ll take to clear this area? My mother will want to get into the bedroom as soon as possible. As for the bathroom, it’s been a loss ever since construction started. This job has had a number of delays and now things will be totally held up.”

The detective zeroed in on her words with eagle-like sharpness. “Have there been issues with how the remodel is going so far?”

Marla cringed inwardly at her inadvertent slip. She would blame her ever-present fatigue, but she seemed to have perked up ever since she’d stepped into Ma’s house. Why was that? Because there might be another crime to solve? What did that say about her, with a baby at home and a salon to run?

“You’ll have to talk to my mother about their project,” she told the detective. “Ma knows the details more than me.”

He stepped closer and stared her down. She caught a whiff of garlic from his breakfast. “The people we’re closest to are often the ones with the most to hide.”

“What does that mean?” Marla asked in a sugary tone, refusing to react to his bait.

“Jack Laredo had not arrived yet when your mother unlocked the bathroom door this morning. From all indications, the man must have died between the time your mom left the house and when Lenny Brooks arrived. This means only one person was home alone with him, and that would be your stepfather.”