You are here: Home / Pet and Animal Books / Dogs / STRAY by Mark Matthews 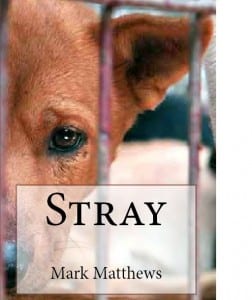 “>What inspired you to write your book?
The setting of the story is 100% true. For many years, I worked at a substance abuse treatment center that shared a parking lot with an animal shelter. At night as I’d walk to my car to go home for the day, I could hear the dogs barking across the parking lot, and then a strange analogy hit me. The distress of the clients I had been listening to and dealing with all day was not that much different than the animals at the shelter. Both of them had lives in transition and were at the moment lost, or at least longing for something permanent. There were Stray pets and stray souls, living side by side.

About your Book:
Stray is a gritty, intense, yet surprisingly sweet novel that masterfully weaves together a substance abuse therapist, the addicts he treats, and the stray pets at the next door animal shelter. Based on a true setting near Detroit, the novel has been met with high praise and wonderful reviews.

After an alcohol-induced seizure during his father’s funeral, Thomas Cleaves remains sober and becomes a therapist to help others just like him recover from their addiction. Tom gets married, his wife becomes pregnant, and he dreams of becoming the father his own father never was. But when his wife miscarries on the same day one of his heroin- addicted client dies of an overdose, Tom becomes convinced that the addicts he treats have infected her womb.

Lost and bitter after the miscarriage, Tom is in desperate need of a client who can give him some hope.

James White is one such client — a newly orphaned alcoholic dead bent on drinking again until he gets discharged and finds himself rescuing lost strays at the next door animal shelter. It is here that he meets the mystical nurse Rachel who cleans cages, rescues strays, but then has the unfortunate duty of putting some to sleep with a lethal injection. Rescuing the throw-away pets of the city becomes his escape, and both his and Tom’s salvation.

Stray will take you through the dog fighting dens and crack houses of Detroit. Experience the minds and hearts of addicts and those who would help them through a world where stray dogs and heroin addicts are killed by needles every day. Stray illustrates the universal longing in all of us as we wander through the aid stations of society looking for a place that feels like home.

What formats are your books in
Both eBook and Print

How do you see writing a book in the Pet Genre as different from writing other genres of books?
Animals have a supernatural sense to them, and in some way represent a higher ‘being’ than do humans.

How did you decide how to publish your book and where is it published through:
Stray was actually acceptd by a traditional publisher many years ago, but they kept it on their ‘coming soon’ list for many years without moving on it, and since I had signed a contract, there was nothing I could do about it. The company went out of business before the novel was officially released, and thus my contract, and the novel, was set free. I then pursued self-publishing, and it has been a tremendous experience.

Author Bio:
Mark Matthews is a therapist who has worked in the behavioral health field for nearly 20 years. His first novel, Stray, is based on experiences working in a treatment center with an animal shelter right next door within barking distance. He is an avid marathoner, and his second novel, The Jade Rabbit, is the story of a Chinese adoptee who runs marathons to cope with her history of trauma and her struggles to save youth in a Detroit area runaway shelter.