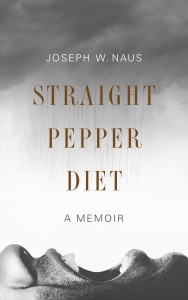 As related in his harrowing yet hopeful memoir, Straight Pepper Diet, Joseph was raised by his mom, a heroin addict turned shut-in depressive, amidst crime and poverty. He survived, graduated from Pepperdine Law School and passed the Bar. However, at age 32, Joseph’s American Dream life became a nightmare when his addictions to sex and alcohol collided and exploded.

“On Tuesday, I was a respected civil trial lawyer making six-figures. On Wednesday, I woke up handcuffed to a hospital bed charged with attempted murder … and then it got worse.”

How do you see writing a Memoir as different from writing other genres of books?
It’s true, so I think it effects the reader. I’ve been a fan of memoir for a long time, and it means more to me than a fiction work. It was very difficult to write about something so intense.

Author Bio:
Joseph W. Naus was born in 1971 in Southern California’s Inland Empire. He both graduated from Pepperdine Law and passed the Bar Exam in 1997. Joseph survived a hardscrabble, impoverished childhood, raised by his young mom, a heroin addict turned shut-in depressive, to become a respected lawyer. However, at age 32, his American Dream became a nightmare when his own sex and alcohol addictions collided and exploded. Joseph’s harrowing yet hope-filled memoir, Straight Pepper Diet, begins on the last day of his former life.

“On Tuesday, I was a respected civil trial lawyer making six-figures. On Wednesday, I woke up handcuffed to a hospital bed … and then it got worse.”