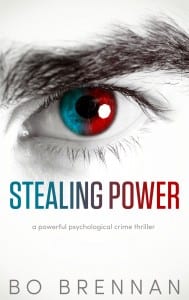 STEALING POWER is easy, restoring it is hard.

Detective Chief Inspector AJ Colt has lived his life in the limelight. The charismatic star of New Scotland Yard is public relations gold. Everyone loves him. Well, almost everyone. For three years, a serial rapist has been taunting and tormenting him, sending him DVD copies of every drug facilitated rape he commits. It’s been one year since he received the last DVD and the trail is stone cold dead. When a new DVD arrives out of the blue, a familiar landmark takes him away from the job and life he loves and back to his home town of Winchester. The last place on earth he wants to be.

Winchester Detective India Kane does not suffer fools gladly, and she’s surrounded by them. Obsessively private, she keeps her head down, gets on with her job, and doesn’t bother anybody. She likes life that way. When people bother her, things have a tendency to get messy. She’s just landed her first lead case – a drug facilitated rape investigation – and doesn’t take kindly to the arrogant newcomer parachuted in to snatch it from her.

The hunt is on.

But the serial rapist is just warming up. As he escalates, so does his power. And he won’t stop until he’s stolen it all, even if it means bringing his own brand of terror directly to those who hunt him.

As they close in on their suspect, Colt and Kane find themselves on a direct collision course with the darkest depths of the human psyche, their own demons, and a web of secrets, lies, and deceit; spun by those they trust the most.

When their lives collide – it won’t just be the victims’ worlds that are torn apart.

What Advice Would You Give Aspiring Writers?
Have a notebook & pen handy at all times, even beside your bed.
Write from the heart, and write for yourself.
Write every single day.
Stick with it and be patient.
Edit, edit, edit.

Author Bio:
Bo Brennan is an Irish ‘Crime Thriller’ writer who has lived and worked in various locations abroad. None were exotic.

Bo’s favourite past times are reading, writing, and eating. Unfortunately, the three combined do nothing for the waistline, so hiking the wild Irish mountains occasionally is a must.

Bo’s debut novel ‘STEALING POWER,’ featuring DC India Kane & DCI Colt from New Scotland Yard, is the first of a trilogy to be published.The second in the series – ‘BABY SNATCHERS’- is due to be published August 2013.

What Inspired You to Write Your Book?
My passions drive my writing – injustice, inequality, and exploitation.

The inspiration for STEALING POWER came from the worrying attitudes in society towards victims of rape & sexual violence.