You are here: Home / Fiction / Mystery/Suspense / Stalked by Alex Dean 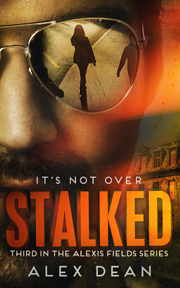 Alexis Fields is now a doctor living happily in Chicago with a new life, a new career, and a new found freedom to replace the harrowing past she left behind. But when several women are found brutally murdered near downtown, Chicago police fear the worst: A deranged serial killer could be responsible for the killings.

Alexis suddenly finds herself in the throes of a sadistic psychopath, who raises the stakes in a game of cat and mouse each time he strikes. Chicago Police and FBI Special Agent Preston Ponder of the VCAU (Violent Crime Apprehension Unit) are under intense pressure to solve the cases before another woman’s body is found.

But Alexis’ ex: Wilfred “Will” Bachman has also been seen in the area. He is now more demented and more determined than ever to finish what he has started: The ultimate payback.

Can the police and the FBI solve the gruesome murders before the killer strikes again? Can Bachman be found before he achieves his goal of hell-bent revenge?

With more action, twists, tension and suspense, this is the third installment of Alex Dean’s scariest, most chilling series yet.

What Inspired You to Write Your Book?
This book is a continuation of the first two books in the Alexis Fields Thrill Series, and follows her along as she tries to rebuild her life after a harrowing past. I wanted to continue her journey and engage readers with a page turning story.

How Did You Come up With Your Characters?
I wanted a strong female protagonist who shows the ability to overcome adversity and some of the problems that regular people face no matter where they might live. I envisioned an attractive, strong-willed woman when creating the character that is Alexis Fields.