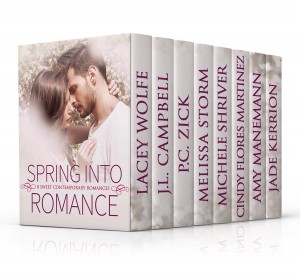 Star-crossed lovers and second chances – meet guys and gals with good reason to guard their hearts even as they follow their dreams. Enjoy eight sweet contemporary romances penned by award-winning and best-selling authors in the Spring into Romance box set.

From betrayal and conflict to secrets and scandals, get ready for a variety of books that will satisfy the romance junkie in you.

Cleaning Up Love by Lacey Wolfe
Penny Watson is hiding from her horrific past as the housekeeper to celebrity Brock Foxx. With a scandal of his own, he entices Penny to be his fake girlfriend. Before long, Penny is swept up in the spotlight as Brock Foxx’s latest fling. While she should be loving it, she’d also worried that the men she’s running from will find her.
The Vet’s Secret Wish by J.L. Campbell
Matthias Laing strikes an uneasy compromise with Toni Nevers, who agrees to marry him on Valentine’s Day—eleven months away. A man of action, Matthias can’t rest easy after Toni’s ex admits he wants her back. With Toni’s daughter and her small army of pets on his side, Matthias rolls out a plan to get Toni to reconsider the length of their engagement and opt for a summer wedding.
Misty Mountain by P.C. Zick
When Lacy and George begin dating, each of them keeps a shield around their hearts. Lacy’s been hurt so many times, she’s afraid to let another man come close. George, reeling from a bitter divorce, doesn’t trust women. If they can put down their shields long enough to discover the love growing between them, then nothing will stand in their way to finding happiness.
You Belong with Me by Melissa Storm
Will Porter lives a life of order and routine, so, of course, he’s miffed when a savage Rottweiler picks a fight with his golden retriever at the dog park. His anger quickly vanishes when he looks into the tearful eyes of the dog’s owner—eyes that look strikingly similar to his ex’s. Even though he’d like nothing more than to run in the other direction, he’s unable to ignore the beautiful stranger’s request for help in taming her new dog…
Love & Light by Michele Shriver
After watching her mother succumb to illness, Kori Walsh sank into a depression that she can’t snap out of. As the star pitcher on his college baseball team, Landon Grayson has plenty of girls vying for his attention, yet finds himself drawn to the sullen girl who keeps showing up to watch practice every day. Can Landon show Kori that there is light after darkness, and if he does, will love blossom?
Mail-Order Groom by Cindy Flores Martinez
Lisa’s wedding is canceled when she catches her fiancé, Jeff, with another woman. In a twist of fate, she meets Krzysztof from Poland who is seeking an American woman to marry him and help him stay in America. After hearing his heart-tugging story, Lisa says “I do” to him. It’s strictly a business deal. He’s not planning to stay in America forever, but she starts falling for him.
Love on the Slopes by Amy Manemann
Jessa Hartley is haunted by memories of the night she threw herself at her childhood crush, Dominic DeRenzi – and he turned her away. Now all grown up, Jessa has moved on and is determined to buy the ski lodge of her dreams. Until Dominic shows up and buys it out from under her. Dominic broke her heart the first time he left. Can he make her see this time around he’s here to stay?
Ensnared by Jade Kerrion
The two Falconer boys, Raphael and Michael, were named for the archangels. At twenty-two, Lily Herald married Raphael, the first Falconer boy. By twenty-five, she was divorced, having traded in her wedding ring for two near-fatal bullet wounds. No one knows why she’s returned home, to the place of so many shared and painful memories, but Michael Falconer’s determined to find out before she destroys what’s left of his family.

What Inspired You to Write Your Book?
We’re a group of romance authors who love what we do. We decided that spring is the perfect time for sweet romances filled with love and hope. This is the result.

How Did You Come up With Your Characters?
The characters in Misty Mountain by P.C. Zick came from the first of my Smoky Mountain romances, Minty’s Kiss. Lacy and George, both wounded from previous relationships, shield their hearts from love. These two characters spoke to me, and I wanted to explore their story so they could overcome the past to “spring” into their attraction and eventual love for one another.