You are here: Home / Bargains and Freebies / Bargain Books Under $3 / Spirians by Rowena Portch 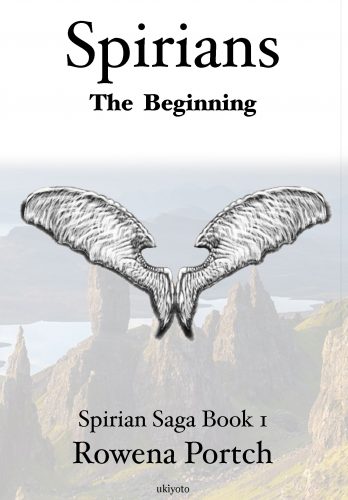 To see your true potential, you must look past your expectations.

Spirians–The Beginning marks the first of the Spirian Saga. It reveals where the Spirians came from and their purpose for being on Earth. This introductory novel dates back to the 1700s and tells the story of Shanuk, the most powerful Spirian in history.

Armen knew a time when Earth existed in peace. Now, the Shadows rule the Earth and Armen feels the threat of extinction—until Shanuk, a cocky young warrior, reveals gifts that were never before witnessed.
Shanuk shows promise, but power comes with a price. Shanuk can mature into the most powerful Spirian in history, or become a devastating Shadow. Like most Spirians with formidable gifts, venturing to the dark side is a tempting choice—one that has not escaped the Shadows’ notice. Bayour, Shadow leader and a puissant adversary, wants Shanuk to join his horde and rule by his side. If he succeeds, the Spirians will be annihilated.

What Inspired You to Write Your Book?
When I lost my sight, I started a journey that would one day change my life. I had a great job at Microsoft where I worked for ten years. My lack of sight prevented me from continuing and I was forced to leave my position as their senior technical editor. This, of course, started a chain reaction of challenges. We lost our five-acre ranch, our cars, and horses. We sold whatever was left and started all over again.

I was earning my doctorate in natural medicine at the time and struggled to find a doctor who would take me on as an apprentice. Using the severance pay Microsoft gave me, my husband and I purchased a medical clinic. In six short months, the clinic was debt-free and making a profit. I was making medicines and treating clients in injury recovery. The entire experience was rewarding.

Now that we were settled and making good money again, I decided to write my story. It started off as an autobiography and I was nearly done with it when my computer presented the blue screen of death. I ended up losing everything.

Nearly in tears, I joined my family by the bonfire and told them the sad news. My youngest son shrugged and said, "Well, Mom, it was kind of boring anyway." After a brief moment of silence, we all started laughing. I then suggested making the story into more of a fiction novel. We all started talking about the funny scenes I could include. From that, The Spirian Saga was born. It is a story based on my life experiences.

How Did You Come up With Your Characters?
The characters in my book are based on real people. Skye plays the part of me, while Khalen depicts my husband. Maiyun plays the part of my guide dog Skye-Bear, and dear old Shanuk plays himself. Arcadie is my father, Eve is my mother. The list goes on and on. So, when you read this saga, just know that every character is as real as life itself.

Book Sample
~ S h a n u k ~
My body shuddered in pain. The repercussions Talden had issued were nothing short of hell unleashed. It had happened two days ago, and still, every muscle in my body felt pulled and bruised. Simple movements were excruciating. Nevertheless, we were expected to contribute to the day's tasks.
My training had been placed on hold for the remainder of the week. Instead, I was tasked with getting the new clansmen settled into their new homes and briefing them on the clan’s ways. There had been rumors about another raid, so the war party was on alert. I hadn't seen Calla in camp, which escalated my concern. I had visited her chamber, but it was empty and her bed looked as if she hadn't slept in it.
I saw Talden crossing the camp with purposeful strides. Perhaps he would know something? I called out to him telepathically. He stopped and turned to face me, waiting for me to approach.
"Shanuk."
"Sire, I haven't seen Calla. Mayhap you know of her whereabouts?"
"She stays with Tesla."
"Thank you."
When I turned to leave, his hand gripped my shoulder. "Shanuk, I will not tolerate another feud between you and Timult."
My eyes narrowed. Talden did not speak words without meaning, and the words he had just spoken were not empty by any measure. "Did he hurt her?"
"I have addressed the issue."
"Have you now?"
"Shanuk," he growled in warning. "My last punishment nearly resulted in your death. Do you really want to challenge me further?"