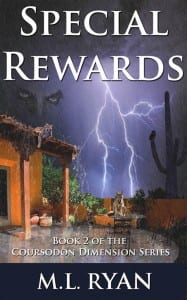 What would you do if you discovered there was a parallel dimension?
Hailey Parrish used to be an average, everyday human. Boring, in fact. After being possessed by Sebastian Kess, a magically inclined enforcer from the parallel dimension Coursodon, her life took a decidedly less mundane turn. Besides coming to grips with the existence of supernatural beings, she risked her life helping Sebastian and her heart falling for his protégé, Alex Sunderland. Now, Hailey has to deal with the bit of arcane power that Sebastian left behind when he returned to his own body and try to stay out of the crossfire when an unknown assailant seeks revenge against Alex.

Targeted Age Group:
18 and over

What Advice Would You Give Aspiring Writers?
Never leave you house without wearing clean underwear.

Author Bio:
M.L. Ryan is a professional woman – which is not to say that she gave up her amateur status, but rather that she is over-educated with a job that reflects her one-time reluctance to leave school and get “real” work – and she spends a lot of time in that profession reading highly technical material. She has many stories rolling around in her head, and she finally decided to write some of them. She prefers literature that isn’t saddled with excruciating symbolism, ponderous dialogue or worldly implications. She also doesn’t like plots so reliant on love at first sight that it makes her feel like her head might implode. She lives in Tucson, Arizona with her husband and teenage son, four cats, two dogs and an adopted desert tortoise.