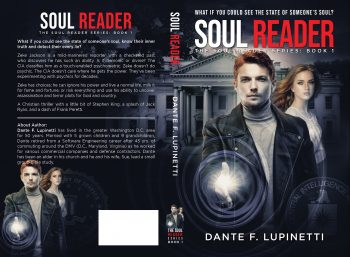 What if you could see the state of someone’s soul, know their inner truth and detect their every lie? Zeke Jackson is a young, mild-mannered reporter with a checkered past who discovers he has such an ability. Is it demonic or divine? The CIA classifies him as a touch-enabled psychometric. Zeke doesn’t do psychic. The CIA doesn’t care where he gets the power. They’ve been experimenting with psychics for decades. Zeke has choices: he can ignore his power and live a normal life, milk it for fame and fortune, or risk everything and use his ability to uncover assassination and terror plots for God and country. A Christian thriller-ish fiction with a little bit of Stephen King, a splash of Jack Ryan, a dash of Frank Peretti and a hint of Ted Dekker.

What Inspired You to Write Your Book?
I believe that we are spiritual beings having a human experience; that God created us to be in relationship with Him; that He put us on this earth to find Him and as some would say, connect with our source. Unfortunately, there is another spiritual source roaming the earth. It is dark; it is the opposite of God and it is powerful. The Soul Reader Series is based on Ephesians 6:12. "For our struggle is not against flesh and blood, but against the rulers, against the authorities, against the powers of this dark world and against the spiritual forces of evil in the heavenly realms."

I needed a love interest for Zeke, a romantic sub plot. Abby Sorensen, a goody two-shoes, provided the perfect love interest. One of Zeke's major obstacles was overcoming his problems with the FBI. Abby, who investigated Zeke as an FBI Special Agent and had CIA connections, could help Zeke overcome his clearance issues and saw his potential. I liked the synergy of these two.

Sly McDonald, Zeke's antagonist, came from my work experiences, co-workers who talk behind your back, put you down and make life difficult for you.

Harvey, Zeke's news boss, came from a combination of my work experiences and my impression of crusty old bosses who have a combination of allegiance to the company and an ax to grind after years of unappreciated sacrifice.

Book Sample
When the cherry blossoms of spring gave way to the sweltering heat of summer, the nation’s capital transformed from a winsome southern plantation into the nation’s armpit. The manicured lawns and stately white buildings visited by adoring crowds seemed less attractive when shrouded in humidity.