You are here: Home / *Reading Room / Audio Book with Sample: Some Are Sicker Than Others by Andrew Seaward @aaseaward 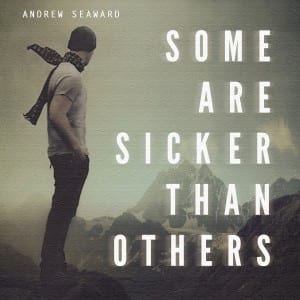 In this gripping debut novel by Andrew Seaward, the lives of three addicts converge following an accidental and horrific death.

Monty Miller, a self-destructive, codependent alcoholic, is wracked by an obsession to drink himself to death as punishment for a fatal car accident he didn’t cause.

Angie Mallard, a recently divorced housewife with three estranged children, will go to any lengths to restore the family she lost to crystal meth.

All three are court-mandated to a secluded drug rehab high in the foothills of the Rocky Mountains. There, they learn the universal truth among alcoholics and addicts:

Though they may all be sick…SOME ARE SICKER THAN OTHERS.

Based on the author’s own personal experience with substance abuse and twelve-step programs, Some Are Sicker Than Others, transcends the clichés of the typical recovery story by exploring the insidiousness of addiction and the harrowing effect it has on not just the afflicted, but everyone it touches.

With the harsh realism of Brett Easton Ellis and the dark, confrontational humor of Chuck Palahniuk, Mr. Seaward takes the reader deep inside the psyche of the addict and portrays, in very explicit details, the psychological and physiological effects of withdrawal and the various stages of recovery.

As Top 10 Amazon Reviewer, Grady Harp, put it: “What sets Andrew’s novel apart from other recovery stories is his deep understanding of the physiochemical aspects of substance abuse and addiction. Seaward not only understands the socioeconomic, psychological and, yes, criminal impact these people create, he also displays such a profound understanding of the physiological/medical aspects of addiction that we are left to wonder if he hasn’t been down the path of his characters himself.”

What was your inspiration for this book?
At first, I didn’t want to write this story. Having spent the better part of my twenties in and out of hospitals and rehabs all over the country, I wanted to get as far away from addiction and thinking about addiction as I possibly could. But I couldn’t do it. No matter how hard I tried to forget all that had happened, the memories were right there, taunting me, teasing me, reminding me just how inadequate I was. So, I did what any stubborn alcoholic with only a year of sobriety would do; I decided to face my addiction head on. I turned off my cell phone, powered on my computer, made a pot of coffee, and locked the door.

But after a few weeks of staring at a blank monitor, I quickly began to realize…I wasn’t gonna remember much. As it turns out, I had drank so much and caused so much brain damage that I couldn’t really remember what had actually had occurred. I remembered bits and pieces and fragments of images, like waking up in a hospital bed strapped down by my wrists and ankles while nurses in green uniforms scurried behind me and connected tubes to my arms. But how I got there and what happened after, are all just blurs of another place and time. So, a memoir was out of the question, unless I was gonna fabricate most of it, but we all remember what happened to James Frey.

So, instead of trying to portray the insidiousness of addiction through my own personal story, I decided to portray it through the lives of three fictional characters. This turned out to be a very good decision. Through my main protagonist, Monty, I was able to ask a very difficult question, that I probably wouldn’t have had the courage to ask otherwise. The question I’m referring to is this:

What would happen if, only after a year of sobriety, I lost the only person in my life that I ever truly loved? Would I, like Monty, use it as an excuse to relapse and drink myself into oblivion? Or would I fight to stay sober and live my life clean and pure, the way that she lived hers?

The answer I came up with was a little disturbing, especially for my parents, who I put through absolute hell. But, I believe it was the honest answer, the truthful answer, and I couldn’t have written it any other way. Believe me, I tried.


Why did you decide to produce an audio book?
Last Fall, I took a road trip from Long Beach to San Francisco so I could visit my godchild, Nora Wells. It was a long drive and I didn’t feel like listening to the same old albums I had listened to over and over on previous road trips. Instead, I bought the audio book version of “Moonlight Mile” Dennis Lehane’s follow-up to the thrilling “Gone Baby Gone.” Though not as good as the first, the sequel did keep my mind occupied during that high octane burn up I-5 across the dry, sun-baked fields of the California high desert. While listening to the book (and at the same time trying to avoid dirt devils) I had an epiphany; I can do this! It’s seems so easy. Just think, people could be listening to my book while caravanning across the country, or working out, or running errands, or doing whatever it is people do while listening to a book on tape. In fact, it seemed downright silly not to produce an audiobook. Just think of all the potential listeners I was missing out on – gym rats, marathon runners, commuters, blind people! It’s an untapped market, and the best thing about it is…it’s as easy as ever to get one produced. In fact, if you’re really lucky, you can do what I did, and find someone who will do it for share of the royalties. See below.

How did you choose the reader for the book and the production company?
ACX. AUDIO CREATION EXCHANGE. Probably the best thing to happen to audiobooks since the advent of the iPod. Not only can you find dozens of quality, voice-over professionals in once central location, you can get them to competitively bid on your books in a way that helps drive down the cost of production. In fact, as I mentioned above, I was lucky enough to find a very talented voice over actor by the name of Andrew Wehrlen, who was willing to produce the book for a share of the royalties. This is great for two reasons. The first, obviously being I don’t have to pay any money up front. The second is that I have another person financially invested in the success of the audiobook who will go to great lengths to help me reach my audience. Why? Because for any sales I make, 50% goes into his pocket. So, he has what I call “marketing motivation.” Also, being a voice-over professional, he already knows where all the listeners hang out. Unfortunately, not everyone will be as fortunate as I was in finding an inexpensive source of audio book production. Andrew happened to have a very personal connection with my story. Without going into too much detail, Andrew has had some experience with people (not himself, but family members) dealing with and sometimes succumbing to the insidiousness of addiction. Due to the intense personal connection he made with the characters in the story, Andrew was willing to help me out by doing what he does best: narration and production. It was as simple as that. The fact that his voice was more natural and “layered” than even Robert Downey Jr’s was just icing on the cake. I will definitely be using Andrew’s services for my next project.

If someone is thinking about creating an audio book, what advice would you give them?
Trust your voice-over professional. They know what they’re doing. Chances are, they’ve done a lot more of these than you.