You are here: Home / Fiction / Mystery/Suspense / So Help Me God by Larry D. Thompson 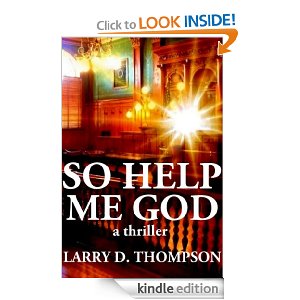 “A richly textured tale of religion and law, politics and medicine.” Paul Levine, bestselling author of Solomon vs. Lord

About So Help Me God

Television evangelist, Thomas Jeremiah Luther miraculously awakens from a twelve year coma. He re-takes his world-wide ministry, and searches for a way to seize the control of the Christian conservative political power in America. When a teenage member of his congregation almost dies from an abortion, he convinces her family to file a multi-million dollar medical malpractice case against the physician and abortion clinic. He knows that manipulating the case into a giant verdict will shut down abortion clinics all over the country, causing power brokers and presidents, and religious right political movement to flock to his door. To assure victory, he hires J. Robert Tisdale, the best plaintiff lawyer in Texas.

Tod Duncan, the lawyer for the defense, finds his mettle challenged when his client’s livelihood is destroyed by Luther’s public claims that he is a murderer. Duncan takes the offensive, suing the money machine behind Luther of slander. To escape liability T. J.’s legal team must prove that human life begins at conception. Great characters bring this challenging balance of art, science and philosophy to a jury charged with answering one of life’s most difficult questions: when does life begin? The twists and turns captivate readers and lead to an ending that might be unbelievable were it not set in Texas.

The fascinating characters and blend of medical drama, courtroom drama and clash of science and religion make for a profoundly thought provoking novel that does not take sides. Hard to put down, emotionally involving and hard to forget – you will love this novel! It is re-released in Kindle following hardcover and mass paperbacks which were received with high acclaim a few years ago.

What Advice Would You Give Aspiring Writers?
The publishing industry is in a state of turmoil today. I was recently told that I was one of the last new authors to be signed by St. Martin’s Press. While I have loved that affiliation, I am considering a move to the self-published realm once again. Today self-published authors earn more from online sales and ebook sales than those of us published by the big name publishing houses. The good news for new writers is that the gate keepers to a large readership have lost some of their influence. New writers are doing extremely well making a name and some money for themselves online. Readers want to be hooked in the first 40 pages and sold on the story line by the first 100 pages. Keep your story telling and writing tight, moving with action and limiting narrative to what is essential to bring the reader into the experience of the characters.

Author Bio:
Before I was an author I was a trial lawyer, and a damn good one (still am for that matter). My older brother chose to be a writer first (and a damn good one); determined not to follow in Tommy’s footsteps, I found myself in law school at The University Of Texas. That may sound somewhat strange, but, unlike so many of my classmates, I had no burning desire to be a lawyer and really went to law school because I didn’t know what I wanted to do, and law school seemed like it was worth a shot. In my senior year I decided that since I was now going to be a lawyer, I might as well see if I could be a trial lawyer.

I founded the firm of Lorance & Thompson and began trying lawsuits. I was good at it and got better. As my skills developed, so did my reputation. My peers have consistently voted me a “Texas Super Lawyer.” I became board certified in two trial specialties. I never kept count of exactly how many cases I have tried, but I know it is far in excess of three hundred. More importantly, I have won better than ninety-five percent of them. And I’m still trying cases as I write novels.

On a more personal note, I grew up in Fort Worth, the son of school teachers. Now, let me reveal a very well kept secret: Fort Worth is one of the great mid-size cities in the country. My fondness for it is such that I am setting my next novel there. You can learn more about it in that story.

My brother was quite a bit older than I. In those years I was just the pesky kid brother. Then, something interesting happened. When I became an adult, we became the best of friends. He had a dramatic career, first as a journalist, then with LIFE magazine and later as a best selling author of non-fiction that read like fiction. I vetted all of his books. When he wrote Blood and Money, I warned him that libel suits were on the horizon. He told me not to worry, that his facts were accurate. He and I were both right. He was sued for libel three times. I defended him and we won all three cases. Sadly, Tommy died a few years later of liver cancer. He had a score of books still to write. I suppose that I knew then that I would someday take up the mantle.

That leads to the last part of this bio, my career as a writer. Somewhere in the depths of my mind or maybe in my heart of hearts, I knew I was going to try to be a writer. Finally, when my youngest son graduated from college, I decided to give it a shot. I combined my knowledge of law, medicine, lawyers and trials to write So Help Me God. It’s a great story that initially went nowhere. Vicki and I decided to self-publish it, and we promoted the book to the point that we attracted the attention of Ken Atchity, literary manager extraordinaire, who saw something in me and my writing and became my agent. Next came the sale of paperback rights to So Help Me God. The Trial was next. It received strong reviews from readers and a large number of major authors. Dead Peasants launched in 2012 and has received great acclaim. See the reviews on Amazon. The protagonist Jack Bryant will no doubtly become a recurring character.

What Inspired You to Write Your Book?
My former law partner, Tom Lorance, who is now deceased, often said that the courtroom was the meeting place of the arts and science. As a trial lawyer, much of my 35 years of practice have been focused on medical malpractice cases. In my first novel I wanted to tell a story that shows how the courtroom has relevance to our daily lives in many ways. Inspired by the play, Inherit The Wind, I crafted a more modern story with remarkable characters trying a lawsuit over the issue of when life begins.