Sometimes even the deepest, darkest secrets find their way to the surface…

Thirteen-year-old Willie Compton and his younger brother Leonard stumble upon a mine shaft while hiking the hills of Park City, Utah. The shaft is unsealed, abandoned. While Leonard stares at the hole in wonderment, a Slinky he’s been flipping back and forth between his hands slithers through his fingers, tumbling toward the mouth of the shaft. Leonard bolts forward, reaches out to grab it, but he slips, then he falls.

Up-and-coming filmmaker Melody Sinclair stirs in her chair, nervously awaiting the debut of her film at the Sundance Film Festival. Based on a true story, Bed of Bones tells a tale of murder, shining a big, bold light on Park City’s tragic past. A past that’s about to revisit the present. 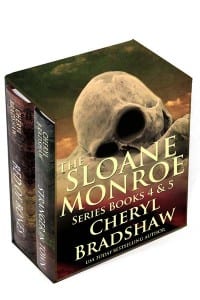 What Advice Would You Give Aspiring Writers?
Don’t give up. Read every day. Write every day. Keep publishing until you connect with your target audience and then write some more. Follow your bliss.

Born and raised in Southern California, Cheryl Bradshaw became interested in writing at a young age, but it was almost two decades before she put pen to paper. In 2009 Bradshaw wrote Black Diamond Death (Book One: Sloane Monroe series). Within six weeks it entered the top 100 in two different categories and remained in the top 100 for over a year. Since that time, Bradshaw has written three additional novels in the series, with a fifth, Bed of Bones, to be released Fall 2013.

Bradshaw is the founder of IWU on Facebook, a writers group with over 2,000 members. In August 2012, Bradshaw was named one of Twitter’s seven best authors to follow. In 2013, Bradshaw’s novel, Stranger in Town, was chosen as a Shamus Award finalist in the category of best P.I. novel of the year. She was the only female nominated in her category.