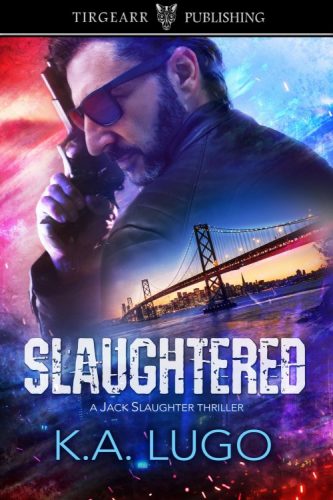 Fallen San Francisco homicide detective, Jack Slaughter, closes the door on the home where his perfect family has been brutally snatched from him. Moving across the city, he works as a private investigator to fund his own investigation into what happened to his family—who killed his little girl, Zoë, and where is his wife, Leah?

Every three month for the last three years, Jack receives a simple text telling him where he can find his missing wife. There’s a body at each location, but none of them are Leah.

Jack hates missing person’s cases, but they’re his bread and butter. He only takes the case to find Carl Boyd’s missing wife because the details of her disappearance closely match Leah’s. He hopes by finding Bonnie Boyd, he’ll find his own wife.

Following the leads in the Bonnie Boyd case, Jack discovers someone has been killing women all over the city for the last three years, a fact Jack’s ex-partner and still best friend, Ray Navarro, has neglected to tell him. The city has a serial killer and officials haven’t been able to find a single lead on the person they’ve dubbed The Butcher.

Could Bonnie Boyd’s disappearance be linked to The Butcher? More important, was Leah one of The Butcher’s victims? Could he have gone so far as to murder a child?

With every clue Jack weaves together, the more his own life unravels.

What Inspired You to Write Your Book?
While writing romance, I devoured many
thriller/mystery/suspense books. I've always loved the psychological thrill. Because of my love for those genres, I have always added suspense to my romances. When I felt I'd said all I wanted to with romance…for the time being…I created Jack Slaughter. As I started writing the character sketch, Jack spoke to me quite loudly, telling me who he is, who he *was*, and what happened to get him to this point in his life.

SLAUGHTRED is the first book in Jack Slaughter's series and where readers learn some of the things Jack told me when we talked…we get the first glimpses of what's in his heart and mind as his search for a missing woman leads him to a serial killer.

How Did You Come up With Your Characters?
I've always been a fan of programs like the Dirty Harry series, The Streets of San Francisco, Bullitt, and pretty much any crime drama set in San Francisco. Having grown up a couple hours from the city, it was the natural setting for the stories.

I loved the protagonists of those shows too…Harry Callaghan, Mike Stone and Steve Keller, Frank Bullitt, etc. So I created Jack to have some of these mens' characteristics. They're hard hitting, no nonsense guys who don't take guff from anyone, yet who also possess a deep sense of right and wrong and compassion.

Jack Slaughter’s heart hammered a hole in his chest as he watched the rail-thin form of the newly-made detective, Paul Travers, stride toward him. If he could read the man’s expression and body language, Travers seemed more amused by Jack’s presence than annoyed.

When Jack started lifting the crime scene tape to duck under it, Travers pushed him back with a firm hand on his shoulder.

"You gotta stop turning up like this, Jackie." Travers’ flippant voice grated on Jack, almost as much as the man’s ruddy complexion and brassy hair. His voice edged on being just a bit too high and too nasal to want to listen to for long. Jack didn’t know how his best friend and former partner, Ray Navarro, could stand it.

With a hand still on his shoulder, Travers nudged Jack back. He made a shooing motion with his other hand. "Why don’t you just go on home and let the professionals do their jobs?"

Travers’ condescending tone made Jack want to punch him in the throat.

"Where’s Ray?" He followed Travers’ gaze over the man’s shoulder and saw Ray standing over the victim’s body several yards away. It appeared to have been deliberately positioned at the foot of a tall pine at the dead-end of the road. "I want to talk to him."

Travers caught his gaze and looked back. "Go home, Jackie. You don’t belong here." He emphasized the word you. They both knew why Jack was no longer Ray’s partner, nor on the force.

Ignoring the little pissant, Jack shouted over the man’s shoulder. "Ray!" His friend looked up and gave a quick wave to acknowledge he’d seen Jack. He finished up with a CSI, then made his way over.

"What are you doing here, Jack?" When Ray reached up to shake hands, Jack palmed his cell phone into Ray’s.

In Jack’s opinion, Travers seemed to take every opportunity to rub it in that he now occupied Jack’s former position. It didn’t escape his notice that Ray also cringed at the word partner. Jack knew his leaving the force had been a blow to his friend too.

He gazed directly into Ray’s eyes, struggling to keep the anxiety he felt from his voice. "I got another one."

"Jack—" Ray sighed, gazing down at the phone’s screen to the open text—Spreckels Lake.

Since the very first text he’d received—You’ll find your wife in the Panhandle—there had never been anything more than the next location. The texts came every three months, as if on schedule. Every one of them led Jack to a body, but none of them were Leah. If the texter was intent on driving him crazy, it was working. But he couldn’t risk the guy was crying wolf. Even after three years, Jack still showed up . . . just in case.

Ray handed back the phone then threw his hands onto his hips. Jack could almost hear the gears working in his friend’s head as he gazed around Spreckels Lake with obvious concentration.

This was a beautiful location. Jack remembered bringing his family here but pushed the memory from his mind. He gazed away from the water, forcing himself to breathe. He knew the answer, but he had to ask it anyway. "Is it her?" Even he heard the waver in his voice.

"You gotta let me do my job, man. You gotta trust me. If this was Leah, you know I’d tell you."

"No buts, Jackie," Travers cut in, edging up closer to him as if posturing. "You’re not a cop anymore. You don’t belong here. Go home."

Jack stared at Travers with a look he hoped said, go ahead and touch me again, pissant, I dare you. He must have got his point across because Travers hesitated before stepping away, his back noticeably erect.

"I’m sorry. Paul’s right. You don’t need to be here. It’s not her." Ray’s voice remained calm. Jack knew the tone, as he often used it to try defusing situations with suspects and distraught families.

"Paul!" Ray’s warning tone made Travers jump, as it did those around them.

In his heart, Jack knew when a victim’s family turned up on a crime scene, or tried insinuating themselves into an investigation, it only disrupted the process. More times than he could count, the time he’d spent dealing with the family would have been better served on the investigation.

Jack shrank away from the crime scene tape, his energy evaporating. "You’re right, Ray. I’m sorry. I just can’t risk that the one time I don’t respond to the text, it really will be Leah."

"I know, Jack. I know." Ray put his hand on Jack’s shoulder this time. "But this isn’t her. Go ho—" Ray stopped short. They both knew Jack hadn’t been home since that night three years ago. "Go back to your place. I’ll stop by after my shift. We’ll talk then, okay?"

Jack looked past Ray’s shoulder to the lifeless body. He watched as technicians carefully placed a protective tarp over the victim, telling him the CSIs had retrieved all the scene evidence they needed and now waited for the coroner’s removal.

Dumping the body at the lake had been a bold move. Even at this dead-end in the road, Golden Gate Park attracted a huge number of people, visitors and homeless alike. Someone had to have seen something.

"Can you use an extra hand?"

"Don’t bother." Jack didn’t have to look back to know Ray watched to make sure he was leaving.

From behind him, he heard Travers ask, "What’s with that guy?"

"Lay off, Paul," Ray said. "You’d react the same way if your daughter had been murdered and your wife was still missing."