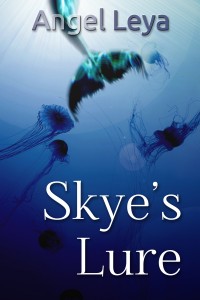 Can saving a human really lead to the destruction of her people?

Skye is a good mermaid, following her elder’s instruction and staying away from humans. But when a party ship cruises through her part of the sea, Skye ends up saving Vince, a man, from drowning – a crime punishable by death. When the ship comes back, so does she.

Lured by the promise of seeing land and the handsome Vince, Skye boards the ship, but finds that Vince may not be as trustworthy as she first thought. Now it’s a race to save herself and her people from exposure and destruction.

What Inspired You to Write Your Book?
I was watching Discovery Channel’s ‘Mermaid: The Body Found’ and I totally fell for it. The next day I found out the truth, but the story stuck with me. What if mermaids really did exist? Where did they come from? Why don’t we know about them? What would it look like if someone actually caught one?

I wrote a legend for my mermaids, and then started expanding into a contemporary story about one very curious mermaid, tired of following elder law and avoiding all contact with humans and land. After some positive responses to my blog posts, I decided to keep going, and Skye’s Lure was born.

How Did You Come up With Your Characters?
Well, of course I needed a mermaid. I wanted her to be strong and curious, but obviously torn between breaking Mer law and following her heart. She also needed to be motivated enough to test out land. That’s where Vince came in.

He’s a bit reckless, born into wealth and more than happy to flaunt it, but despite some bad decisions, he’s not so bad a guy. He just doesn’t want everyone to know about it.

There needed to be a push and pull to their relationship, and a few side characters help do that, but I feel their personalities provide the majority of the conflict.

Book Sample
Surfacing when the fishing boats came around was intoxicating. The sights, the sounds, the danger; all of it heightened the thrill of the hunt. We followed them because of all the marine life they attracted, but we had to be extremely careful not to get caught in their nets or come close enough to the surface to get spotted.

This boat was different, though. Thousands of tiny lights lined the decks, and colors burst from its belly. It glowed like a jellyfish from the deep, but sparkled like the starry night sky. I had never seen such a boat, and I could hardly bring myself to look away.

I glanced at the Mer in my pod. They were all asleep, one eye open and the other closed. We learned the technique from the dolphins long ago. As mammals, we lacked the gills needed to convert water into oxygen, so falling fully asleep would result in drowning.

Tonight, though, I couldn’t sleep. I always had trouble sleeping after a retelling. The story just didn’t seem right to me. Of course, if I had been asleep, I would’ve missed the boat.

I glanced around the pod one more time before deciding to surface. My eyes rose above the water a safe distance away, hair clinging to my head. The boat was full. Humans moved like a school of fish, nearly in sync with their thumping and thrashing. No one bothered to look at the water.

I dared to swim closer. The smell of salt water mixed with sweet and sour notes that tickled my nose. I could practically feel the heat emanating from the moving crowd, which pulsed to a deep, hypnotic rhythm. My heart thumped to the same beat. I wished I had feet so that I could join the humans in their celebration.

A brown bottle came hurtling towards me, and I dove to avoid it. My nose wrinkled as I let out a huff. Humans often threw things into the ocean. Why didn’t the Sea King change all humans into Mer, if he was so intent on teaching lessons? At least my people had respected the waters—until the end of our existence as humans, that is.

The bottle sank, and I considered retrieving it. What would the humans on board do if I threw it back on the deck? How would they feel if I littered on their boat? I couldn’t risk exposure, though, so I did nothing, watching as the bottle disappeared into the depths.

A commotion arose from the deck above, and I looked up just as one of the men fell backwards over the rail. He hit the water a short distance from where I floated. The impact pushed a small wave over my head. My eyes wide, I considered fleeing. It’s what a normal Mer would do, but I didn’t.

I had never been this close to a human.

I sank beneath the water to get a better view. The man’s clothes floated like a blooming coral. He clawed at the water, his legs twitching and jerking, but they couldn’t bring him back to the surface. Eyes bulged, cheeks inflating like a frightened puffer fish. His sandy hair swayed like a surreal halo.

Why couldn’t he surface?

The man went still, eyes focused on me. His mouth opened, a large bubble escaping. The calm didn’t last. Eyes went wild, hands grasping at his throat. He looked at me, pleading.

I hesitated. The retellings said that I should loath and fear this human, but he didn’t look so bad. No more splashes came from the boat. Would no one rescue him? In the glimmering light of the boat I could see the man’s eyes rolling back into his head, body going limp.

I darted to his side. Throwing my arms around his waist, I swam towards the surface. He was heavier than I expected, his body like an anchor trying to drag me down, but I fought back.

Our heads broke the surface, and I scanned the waters. A circular object floated nearby. It was bright orange, and a rope connected it to the boat. Peering up, I saw people running around, shouting at each other. I had to hurry if I didn’t want to be seen.

I heaved the man’s body onto the floating object, but he slid off. Grabbing him, I pulled the floating object over his head, but there was nothing to keep him there, and he began sinking again. I tried once more, pulling his arms through the object, and this time it stayed, hugging his chest.

The man slumped over, his lips blue, chest unmoving. Was I too late? After a tense moment, he sputtered, water gushing from his mouth. He was breathing. I breathed as well, as if by doing so I could help him recover.

Now that he was safe, I took in his face again. There was nothing comical about it now. A chiseled chin and squared jaw framed full lips that seemed curved in a perpetual smirk. The blue of his skin was fading, returning his tone to warm beige colors.

He raised his head, wiping the trickling water off his face. Once again, his green eyes focused on me, thick brows furrowing. Slowly, those brown brows crept up into his hairline.

My hand stretched out, as if it had a mind of its own. The elders would kill me if they found out, but in this moment, I didn’t care. Maybe the humans weren’t so bad. Maybe it was time to challenge everything I knew.

As my webbed fingers approached his face, the man thrust his hand towards mine, fingers outstretched. He lost his grip on the orange object around him, and he brought his hand back down to balance himself.

Shying back, I stared. He grinned sheepishly, and my lips curved upwards in response.

The commotion from the deck grew louder, and I looked up as shouting voices approached.

Words floated above the din. “We’re coming! Hang on.”

I raced for the safety of the depths. Sure I couldn’t be seen, I stopped and hovered below the boat. The man’s feet disappeared as he was hoisted from the water.

I waited there a long time, staring at the golden bottom of the boat. How was the man doing? Had the party continued or were they done for the night? Lights continued to pulse and twinkle as the boat sailed away.

When I returned to the pod, I found my pod still sleeping. I swam beside them as I waited for rest to come, but I could not stop replaying what had just happened. The man’s eyes burned into my imagination. What would it have been like to touch him? What would his voice have sounded like? Would I ever see him again?

I was bursting to tell someone what happened, but that was impossible. It’s not like I had a death wish. It was foolish of me to go near that boat, but I had to admit, I wasn’t sorry.

To tell the truth, it left me wanting more.