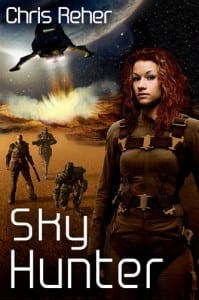 Air Command pilot Nova Whiteside is assigned to a remote outpost to guard the construction of a new tethered orbiter, Skyranch Twelve, against rebel sabotage. The difference between the well-ordered Union air fields and this dusty garrison is made painfully clear when she runs afoul a brutal commander of ground troops.

When she is trapped behind enemy lines in a bloody uprising she meets Djari, a civilian whose trust in the governing Union is shattered by what he has witnessed.

Aboard the elegant new space station not all runs according to protocol and she soon suspects that more than farming is being done up there. When she uncovers the treacherous and illicit schemes taking place, it seems that local riots are the least of their troubles.

Targeted Age Group:
YA up to any age

What Advice Would You Give Aspiring Writers?
Learn the rules and then break them in interesting and consistent ways.

Author Bio:
I am a first generation Canadian currently and out of necessity residing on planet Earth (which, in the general and interplanetary scheme of things could REALLY use a catchier name, if you ask me. I mean, imagine heading past Proxima Centauri and someone asks you whence you came and you tell them “dirt”. All theological implications aside, that just won’t do.)

My first full-length work of fiction, Flight To Exile, is a fantasy which, I just realized, takes place on a planet that doesn’t have a name at all and blurs the line between sci-fi and fantasy in ways that are probably illegal.

I then headed out far beyond Proxima Centauri and found a nifty story that soon turned into a Space Opera complete with wormholes and improbable laser guns. What fun. Laws of physics need not apply if you find a way to explain them away.
The series stars Nova Whiteside as a space marine whose pesky humanity keeps getting in the way of her doing her job according to protocol.
Currently, there are four books in the series, with two more planned.

When not finding ways to torture my subjects or entice them with inter-species hanky-panky, I design web sites or write about designing web sites. I enjoy long walks on the beach or, given the local beach shortage, write about beaches far beyond Proxima Centauri.

What Inspired You to Write Your Book?
Readers of other books in this series have asked for the main character’s back story. There were some hints about her formative first few years as a pilot and I wanted to explore those ideas.