You are here: Home / Fiction / Mystery/Suspense / Show Up Dead by Lisa Shiroff 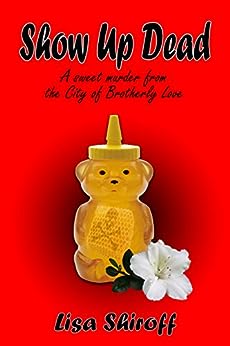 When people call her a control freak, Peri Milano takes it as a compliment. As the preferred go-to special assistant to Philadelphia’s rich and almost famous, having everything under control is part of her job description.

With the organizational skills of a data processing program, the discretion of the CIA, and the creativity of an Ikea research and design engineer, Peri fulfills whatever whim her customers fancy and finds methods for their madness.
Never has she received a request she couldn’t complete nor a problem she couldn’t solve.

So when she finds the dead body of one of her clients and lands smack in the middle of a murder investigation, Peri simply adds a few more items on her to-do list. It’s nothing she can’t handle.

But when another client receives a blackmail letter, her son’s type-1 diabetes nearly kills him and her mother ends up in jail (again), Peri starts to doubt whether anything is truly ever under control. She can’t help but wonder just who will be the next to Show Up Dead.

Proceeds of the book go to funding a cure for Type 1 diabetes.

What Inspired You to Write Your Book?
The spark for the book came from overhearing a chance remark in a supermarket. I was standing in line waiting to check out. The person in front of me was a man dressed in women’s clothing. He bought only a cellophane-wrapped bouquet of flowers he’d picked up in the produce department. He mentioned to the cashier that he wished he could find roses in the perfect shade of red.
I started wondering what that shade of red would look like. Why was it so important to him? Is his house decorated with it? Did he own a cocktail dress in that color? From those questions, the character Mr. Wooley approached me in my fuzzy head and I began thinking about how people fit or not fit into society — which wound up not being a big theme of the book.
The theme was inspired by the protagonist, Peri. I wanted to write a book that dealt with living with type 1 diabetes but I had promised my daughter (who is a type 1) that it wouldn’t be the main topic. For some reason, as Peri came to me, she turned into a mom of a diabetic teen son. Diabetes is disease about control. There’s a motivational saying diabetics often say: I control my diabetes, my diabetes doesn’t control me. So it seemed on “right” that I would create a protagonist who has an over-controlling personality because she wants to keep everyone she loves safe. But when you over-control, you lose control, and that’s what Peri ultimately battles with as she tries to solve the murder mystery and is the theme of the book.

How Did You Come up With Your Characters?
My characters just come to me. I know that isn’t a very satisfying answer, but it’s true. I just mentioned in the previous section about how Mr. Wooley came to me. Once I meet one character, scenes, settings and other characters just come.
The key for me is that I cannot force it to happen. I have to be very relaxed and partially focused on something else to allow the characters and the book to flow to me. It’s as if my mind gets a little bored and wants to entertain itself so it creates these characters. If I pay too much attention to them or focus too hard on them, they disappear.
What I do to make them lifelike is once I start the writing process, I will make myself answer questions about the characters. Everything from “what color are his eyes?” to “what is always in her refrigerator?” to get to know them as best I can. I try to make them as real and lifelike as possible so that I can properly introduce them to my readers and have my readers get to know them well, too.