You are here: Home / Faith and Religion / Biblical Studies / Should the Church Abandon the Bible? by Jim Vincent 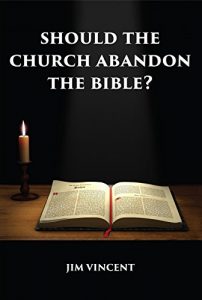 Does the Bible have any relevance in the 21st century? In this thought-provoking book Jim Vincent asks whether the Bible can still be considered divinely-inspired and whether its moral code has any applicability today, before going on to examine the Old and New Testaments in detail and to assess how much of them remains acceptable to the unbiased reader. The concluding chapter argues that the church must set aside its traditional view of the Bible as its holy book if it is to grow into adulthood and present a Christianity that is both credible and contemporary. It proposes that the church, as also the individual, may find a new lease of life in freeing itself from the constraints of ‘holy scripture’ and in evolving a new form of non-exclusive Christianity that is adaptable to changes in science, psychology, secular law and society.

The book is written from the perspective of the Christian Agnostic/Atheist who finds it impossible to reconcile large parts of the Bible – and the doctrines that flow from it – with modern thought. It is not an unmitigated attack on the church or the Bible. On the contrary, it represents a positive recommendation for change.

The book is not intended for the scholar. It is written for the general reader who has an interest in contemporary Christianity and its future – and, indeed, in whether Christianity can be said to have a future at all.

What Inspired You to Write Your Book?
This book was written out of an increasing inability to accept huge swathes of the Bible, as it is traditionally presented by the church. I came to realise that dwindling church attendance over the past 100 years is due primarily to the increase in education and the notion that people should think for themselves. The inevitable consequence of this is that the vast majority of people no longer consider the Bible to have any relevance. Hence, the question I raise in this book: Should the Church Abandon the Bible?

Links to Purchase Print Books
Buy Should the Church Abandon the Bible? Print Edition at Amazon

Buy Should the Church Abandon the Bible? On Amazon