You are here: Home / Fiction / Shekinah by Paul Beech 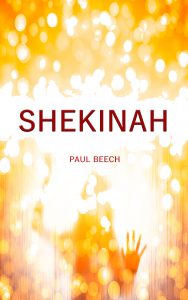 ‘I rolled my tongue around my mouth and tasted the metallic tang of my own blood.’

Joe Ambery has always know he was different – but when a psychic shock brings colours to his eyes and savagery to his nature, he thinks they must be signs of madness.

But unknown to Joe, someone or something has awoken, thousands of miles away, kick-starting a chain of events that will lead him into the heart of an international conspiracy.

Who or what is drawing him across Europe?
Why does he dream of a shadow-filled room?
What unimaginable power has been unleashed?

The day of the Shekinah has come.

What Inspired You to Write Your Book?
I had always wanted to be a novelist, but money worries finally convinced me enough was enough: I would write a pulpy, dark romance teen thriller in just three months. i was a fan of Gothic fiction, had watched tons of Hammer Horrors – how hard could it be?

But my stubborn perfectionist streak would not let me off so lightly, and after three years of hard slog (including countless plot changes) I finally finished my first novel, ‘Shekinah’, at the end of 2015 – a novel which has little or nothing to do with the dark romance genre, nor with any of those Hammer Horrors I watched as a kid.

The lesson? Never settle for second best. There’s always a better idea out there, if you’re prepared to scour your brain and drive yourself to the brink of madness for it.

How Did You Come up With Your Characters?
Joe was originally just a composite “deep and edgy teen” character, with only the tiniest bit of me in him; but as time went on I put more of my own fears and worries into his thoughts and feelings. I wanted to stress from the beginning that he feels himself to be an outsider, and to establish enough reasons to make it credible when he decides to run away from home. He is certainly not a typical hero. Clémence was also a composite character, but this time made up of real strong-minded women whom I admired, including Nico (the singer with the Velvet Underground) and Marianne Faithfull. She starts out a reckless drunk, but, like Joe, becomes a different kind of character as the story progresses. The other main character, Molnár, was originally a kind of Van Helsing style expert who had all the answes, but as time went on he developed into more or a questioning character, one who is uncertain of his own theories and actions.

Book Sample
‘We should go,’ I said, getting up. She groaned and rolled over into a crouch. I pushed down on the grass with the flat of my hand to help myself up, but quickly pulled it away in pain.

A small, jagged piece of glass was jutting out from the centre of my palm. I drew it out, and a blob of dark blood welled up, trickling down to the edge of my hand. Tiny shards of glass from the neck of the beer bottle sparkled in the sunlight.

With a movement that was almost feline, Clémence slunk towards me on all fours. She took hold of my injured hand and. before I could react, pressed her lips to the wound. The same tingling sensation I’d felt when we had shaken hands made goose bumps rise along my arms. i could feel the heat of her breath, the coarseness of her tongue.

She raised her head and licked her lips, her mouth curving into a grin.