You are here: Home / Fiction / Paranormal / Shades of Gray by Joleene Naylor 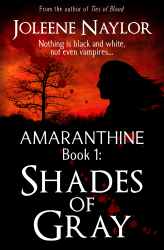 When Patrick is found dead in his apartment, Katelina is left in a vacuum of uncertainty with no leads. Then the enigmatic Jorick appears. In a single sweep he turns over the rocks of reality to reveal what hides underneath in the shadows; monsters that she thought only existed in horror movies.

Trapped in a nightmare, Katelina is forced to accept the truth of vampires; vampires who want her dead for her association with Patrick. Jorick saves the day, but what should she do when her hero turns out to be one of the monsters? Can she really trust – and even love – someone who isn’t human?

Caught between light and dark, Katelina and Jorick must travel down a path of mystery and terror as their pasts are slowly revealed and their passions ignite, in a world that smells like blood and tastes like fear.

Look for the action-packed sequel, Legacy of Ghosts!

What Inspired You to Write Your Book?
At the time I was writing in an online group, and though our stories could get a little out there, they were mostly light and fun, and I wanted something heavier and darker. Listening to HIM really helped set the mood, especially their Dark Light and Love Metal albums.

How Did You Come up With Your Characters?
Jorick was actually a character named Drenken from that writing group who I felt deserved more “screen time”. But once i changed his name, his personality and his history changed themselves. I find that most characters will kind of write themselves based on their names or their appearance which, I won’t lie, on a couple of characters have been inspired by anime. (You can take a look at my Character Art Gallery and guess which ones, ha ha! – http://www.joleenenaylor.com/books/charbio.php )

Book Sample
“Not real, not real, not real,” she whispered to herself, screwing her eyes shut. She was an assistant to a newspaper editor in the world of paper and glass and plastic; a glorified gopher that made coffee and fetched things and talked on the phone! She was not the heroine in some horror movie! The newspaper, that was real. Her boss, Mr. Fordrent, he was real. Her apartment with the pink flowered curtains, that was also real. Jorick and this tunnel, that thing in the room and the smell of damp and earth and fear… none of those things were real.
She opened her eyes, but the darkness was still there, held back by the trembling rays of light from her nub of a candle. She stared around wildly, looking for some crack in the façade of dream she was trapped in. She thought of Sarah and her warning. Yes, this was how people died.
Suddenly she remembered her phone. Sure, she shouldn’t mention to the operator that there was a monster locked up not ten feet away from her, but that was okay. It really didn’t matter what she said. She’d heard enough 9–1–1 tapes on the news to know that she just needed to gurgle something that sounded like, “help.”
She dug the phone from her pocket and mashed the button. She waited for the ringing to start, but nothing happened; there was only silence. Panic filled her and she hung up and redialed. Nothing. And then she saw the symbol on the screen. She had no signal.
“You have to joking,” she nearly cried. “This cannot be happening. Oh my God. This cannot be – ”
A scraping sound interrupted the flow of her terrified words. She snapped her phone shut and bit her lip until she tasted blood. Some instinct told her that she must remain quiet. Even though it seemed impossible, this was real. The hallway, the creature, the sound; it was all terribly, incredibly real.
The scraping noise grew louder, and was soon followed by a crash as something heavy struck the floor. She slid down the corridor, her back pressed against the wall to keep as much distance between her and Michael’s door as possible. She stopped, raised the candle, and peered down the tunnel. A section of the ceiling had fallen in and, as she watched, a figure dropped down from the newly formed hole. She caught her breath and dashed the candle against the damp stone.

About the Author:
Joleene Naylor is the author of the glitter-less Amaranthine vampire series, a world where vampires aren’t for children. As a compliment to the novel series, she has also written several short stories, including the Vampire Morsels collection, and has plans for an Amaranthine Encyclopedia.