Young wife, Gracie yearns for newlywed innocence. Abiathar wants to secure it for her. Their trek has been anything but blissful. Stomach their journey. Strengthen your faith through their experience. Glimpse miracles and tribulations of future pioneers as you live vicariously through this young family. 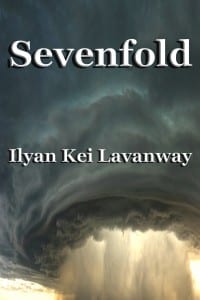 How is Writing In Your Genre Different from Others?
I offer perspectives you will not find in other books of similar genre. I weave eternal principles and moral messages into my stories while at the same time unleashing gritty, evocative details of the human condition. I do not write for the squeamish or the easily offended. My work takes guts and thought to read and to appreciate.

What Advice Would You Give Aspiring Writers?
Write your heart out, and don’t let anyone censor you. Prepare to be hated and rejected, and don’t let that stop you from writing.

Author Bio:
Ilyan Kei Lavanway is a fresh new face in the world of indie authors and publishers. His unique name could prove to be an asset as an author and publisher. Mr. Lavanway is married and has one son who has Down’s syndrome. Mr. Lavanway grew up in Wenatchee and Waterville, Washington State. He is the oldest of seven siblings. He spent his high school summers driving wheat trucks and combines during harvest, earning cash to support his first love, the love of flight. He was an avid private pilot in his teens. Ironically, for all his love of aviation, Mr. Lavanway’s 14 years in the United States Air Force never landed him a flight crew assignment. Nope. He was kicking it subterranean school in a capsule beneath the North Dakota plains as an ICBM launch officer for his first four years of service, followed by a year of really uninteresting work in a vault, on base. His next two years took him up near the Canadian border, to the giant, phased array early warning radar site outside Cavalier, North Dakota. Then, he was off to California. Academic assignments filled the final seven years of his military service. By the time he left active duty, Mr. Lavanway had discovered his passion for writing. Since life has thrown him a few curves that make it impractical for him to return to flying airplanes, Mr. Lavanway has poured his heart into writing. His education includes a bachelor’s degree in mathematics and a master’s degree in Space Studies. Mr. Lavanway’s aptitudes for aviation and sciences show in some of his stories. His works offer unusual perspectives, giving readers rich depth of thought.

What Inspired You to Write Your Book?
An often overlooked Old Testament prophecy about the last days inspired me to write Sevenfold.