You are here: Home / Fiction / Seized: Book One of the Pipe Woman Chronicles by Lynne Cantwell 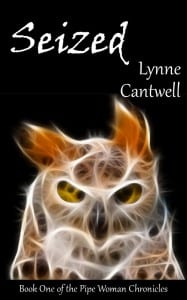 The winter solstice 2012 won’t be the end of the world. It will be the beginning of the end….

Naomi has a pretty sweet life. Respected as a skilled mediator, she has an almost uncanny knack for getting people on both sides of a dispute to agree. And her handsome boyfriend Brock has just proposed to her. But a white buffalo calf is bowing to her in her dreams. And who is the Native American man who has been following her around?

Naomi doesn’t know it, but things are about to change….

Author Bio:
Lynne Cantwell grew up on the shores of Lake Michigan. She worked as a broadcast journalist for many years; she has written for CNN, the late lamented Mutual/NBC Radio News, and a bunch of radio and TV news outlets you have probably never heard of, including a defunct wire service called Zapnews. Lynne’s vast overeducation includes a journalism degree from Indiana University, a master’s degree in fiction writing from Johns Hopkins University, and a paralegal certificate. She currently lives near Washington, DC. “Fissured: Book Two of the Pipe Woman Chronicles” was released in spring 2012, and “Tapped: Book Three of the Pipe Woman Chronicles” is scheduled to be released in December 2012 — just in time for the end of the Mayan calendar (or not).

What Inspired You to Write Your Book?
For NaNoWriMo 2011, I wanted to try writing an urban fantasy and I wanted to set it in Denver. But I wanted the main character to be different than the typical heroines in the genre, so I made her a little older — mid-thirties and mid-career — and I gave her a sense of humor. Things kind of snowballed from there.