You are here: Home / Fiction / Mystery/Suspense / Second Self by JW Robitaille 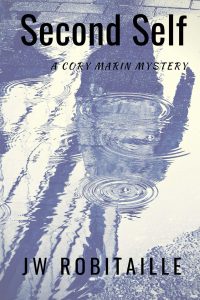 When Sergeant Cory Marin and Marty Washington begin to investigate the ritualistic murder of an international student, the leads and suspects keep multiplying. Is the killing tied to a similar one twenty years ago? Is the girlfriend’s possessive ex-boyfriend responsible? Do the victim’s fraternity brothers have a reason to want him dead? Or are the victim’s girlfriend or best friend involved?
When they discover a tie-in with the virtual world, Second Life, events take a bizarre twist. As her avatar tracks down leads in Second Life, Cory is faced with a new threat from Fletcher Manning. Luckily, she has Marty Washington, and her father, Jack Riley, in her corner, but can they protect her from Fletcher?

What Inspired You to Write Your Book?
The latest book in my Cory Marin series is Second Self. It was inspired by an awareness of the complexity of modern digital life, where we may have a variety of personas (on Facebook, in the media, as avatars in games). Cory has to contend with media images not under her control as she struggles to solve the baffling murder of an international student. The murder and the idea of our various digital personas came together to make a book.

How Did You Come up With Your Characters?
I wanted my heroine, Cory Marin, to be emotionally complex, and I wanted her to be an outsider. She was born in New York to a Puerto Rican mother and an unknown father, so she is mixed race and must grapple with issues of identity, trust, and acceptance in a male profession. My cast of characters is a mixture of races, ethnicities, and sexual identities (gay and straight) because I wanted to represent multi-faceted perspectives on modern life.

Book Sample
The late afternoon sun warmed Sergeant Cory Marin's shoulders, making her feel like a lizard basking in the warmth as she checked email. Official traffic was light, with the brass and her detectives just coming back on rotation after the holidays. For the past several years, Cory had volunteered for holiday duty, preferring to work rather than face her empty apartment alone. But this year, her two youngest detectives, Alex and Mac, both unmarried with no families in town, had volunteered to be on call, and she had taken rare time off to spend the holidays with her father, Jack Riley, and her partner both in and out of work, Marty Washington. She had the sense that her life was solidifying at lightning speed. She had gone from alone to, as her friend Janelle put it, instant family in a few short weeks.
On Christmas morning, she had gotten out of bed early to make French toast stuffed with guava jelly and cream cheese, and they had opened presents together, Jack sitting cross-legged beside the tree and playing Santa Claus. She and Marty and Jack had celebrated New Year's Eve together. Jack had lit the table with candles and made oyster soup and standing rib roast, finishing with bread pudding and whiskey sauce for dessert. He assured her that the whiskey had burned off in the cooking, and the sauce was perfectly safe for the baby.
He raised his glass of wine. "To new life." He nodded to Cory's belly. "Yours and mine both."
Cory raised her sparkling grape juice. "Here's to marvelous food and sharing it with family."

Buy Second Self On Amazon