You are here: Home / Fiction / Mystery/Suspense / Seared by Sandra Gustafsson 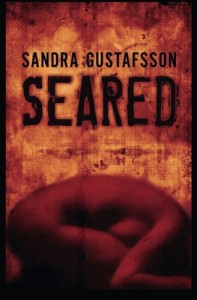 Helena is incarcerated. She has crossed the lines, but what has she done?
Once a week, Helena see a psychologist and talks with him, and the truth is presented piece by piece. For several years she had a relationship with a man who gave her the courage to live, despite her dark secrets, but she was always “the other woman” and finally Helena’s fragile world crashes.

We meet Helena in shards: talks with the psychologist interspersed with flashbacks to her childhood and Helena’s inner conversation with the love of her life.
The story is full of nerves and tension rises with the realization of who Helena really is.

Seared is a psychological thriller that insightfull depicts a broken womans desperate attempts to create a life worth living.

What Inspired You to Write Your Book?
When I was doing research for my first book, the autobiographical The Dandelion Kid (2006), I found some medical records regarding my mother. I new, after reading some other papers, that she had left a child up for adoption. In this new records that a psychologist had written, she does not mention this at all – nothing. She talks about the weather, about her work.
In the records I found this closing note about their meeting: “Thoughts and emotions all normal.”
It was so provocative to read! How could he wright that? He could not now what was inside her, right?
That was it.
I wanted to write a novel about a woman who sits and talk with a psychologist but really don’t mention the bad things. So I did.

How Did You Come up With Your Characters?
My characters is a mix of me and other people I have met in my life.

The next day was not good.
She felt stabbing pains in her legs, snakes writing inside her arms, and fingers of young men fumbling around in her brain. She couldn’t stop her teeth from chattering.
But she endured it. Because this was something she could manage.
When you put up with it, that showed you were big. A big girl.
“Now surely there’s no need for such a fuss, is there?” Just as Mommy said when Helena was tiny and stepped on a nail.
That was the time the family took an excursion trip. When Mommy and Daddy walked side by side and didn’t stare daggers at one another. When Helena couldn’t take her eyes off her parents as they conversed in low voices, almost intimately, for fear she’d miss some of what they were saying.
They’d gone on a bus tour to visit an old castle, forty-five minutes outside the city. A place that had once bristled with arms but now was a splendid ruin with stamped postcards for sale at the gate for three and a half kronor.
Close to a little zoo. A large goat lay asleep against a tree. A year earlier it had tried to butt everyone who got close to it. Maybe they’d decided to feed it tranquilizers. For the good of the visitors. It lay there with its nose in the dirt, visible but not really there.
Like me, Helena thought. Just barely there, existing just enough not to disappear.
It was the most beautiful day of her life, one she’d always remember. The memory of it always made her stomach ache.
Spring had scattered wild snowdrops in the forest clearings, and the birch trees were in bud. The colors were so intense they hurt Helena’s eyes. When she squinted at them, everything took on a romantic glow.
Her parents looked like angels. They were silhouetted against the sun, so it created a halo round their heads. They’d been transformed, absorbed into a glorious secret circle that only Helena could see. Helena backed away as they approached, wanting to preserve that shining light, to remember the moment and guard it deep in her heart of hearts.
No one had any idea what was about to happen as she backed away, not looking where she was stepping. No one knew that time was almost up. No one had seen what lay waiting on the ground.
The nail pierced her shoe and made a faint squishing sound as it sank deep into her heel.
She fell over backwards, screaming in pain. Her stomach knotted up, preparing to purge itself of a pinkish mixture of cinnamon bun and raspberry juice. People jumped in shock at her screams. Quickly backed away as her stomach turned itself inside out.
“Now surely there’s no need for such a fuss!” snapped her mother, her lips in a thin tight line of displeasure. Her quick fierce glare drove people away. She held Helena’s hand as her father carried her to a bench.
“Oh come now, Helena, that wasn’t so bad, was it? And we were having such a good time, weren’t we? You need to watch where you’re putting your feet.”
Helena squeezed her eyes shut, her memories in a muddle.
The impressions presented themselves in a tangled rush. The taste of vomit in her mouth, the dazzling sunshine, Daddy’s embrace and Mommy’s scolding — they all gradually faded away. Vanished like the mist of an early morning.
Helena struggled to hold on to her memories.
She wanted to see her foot, to feel the pain again.
Now, now. Big girls don’t cry. And even more important, they don’t take pills. That’s a sign of weakness. Even the doctor had told her that.
“Only if you really think you can’t get along without it.”
And she couldn’t.
That much was obvious. Everyone knew.
Even Mommy. She was the first to say so.
“Maybe you need some medicine, Helena.”
Mommy’s seal of approval. That settled the matter. As if anyone had ever paid attention to her. Well, that wasn’t entirely fair — after all, Helena certainly had. Locked in her lonely existence, she’d intently weighed Mommy’s every word, look and expression. Seeking confirmation from words unspoken, from the glints of shifting color in her eyes, from her pursed lips and suppressed sighs.
Helena wanted so much to think well of her mother, but she refused to trust anyone. Ever.
Helena relied upon herself alone.
Rejected dependency. She’d stop wondering why a long time ago.
Some things just are.
Some things just happen.
You can’t know what makes another person tick, she thought, lying there and drawing up her arms and legs. Her limbs, as if they had lives of their own, defied her and insisted on jerking out in different directions as if determined to tear everything to pieces.
Her body ached, all quivers and spasms. She was certain she’d been reduced to a swirling mass of darkness, light and pain.
If only she could reset her brain, plug it into ecstasy so her body would quiver with orgasms instead of cramps. She desperately wanted to have someone to cry out to, a counselor, a helper. She prayed to a God that didn’t exist. The God who was there for everyone but her.
Just like always.
Like the time in her childhood when she went up too high on the swing and leaped off and slammed so hard into the ground. No God protected her then, either. The result was two broken ankles and an eternity of solitary healing.
“You should have thought before you jumped,” was her mother’s only comment.
Obviously. What a blockhead she was, not thinking of the consequences.