You are here: Home / Fiction / Mystery/Suspense / Sea to Sky by R.E. Donald 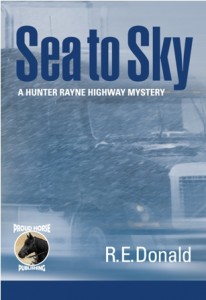 A dead man rides the chairlift to the bottom of a ski hill on Whistler Mountain. Former RCMP homicide detective Hunter Rayne is at the top of the suspect list, so Hunter has no choice but to get involved in the investigation in order to clear his name.

Meanwhile, trucker Hunter was scheduled to haul a load of freight to Northern California, so he calls up his old friend, biker Dan Sorenson, to take his place behind the wheel. What connects the badass biker from Yreka, California to the most prolific female serial killer in US history? And what happens when dispatcher El Watson ignores Hunter’s warning and gets the biker involved in the murder investigation?

In the midst of the investigation, Hunter’s life gets complicated when the progress of a new relationship is hampered by the appearance of a woman from his troubled past.

Sea to Sky is the third novel in the Hunter Rayne highway mystery series.

What Inspired You to Write Your Book?
The Sea to Sky highway is the road between Vancouver’s North Shore cities and the resort community of Whistler, BC. In the previous Highway Mystery, Ice on the Grapevine, Hunter made the acquaintance of a female lawyer from Los Angeles. She told him she intended to take a skiing holiday at Whistler Mountain the following winter, and since it was close to Hunter’s home base, suggested she would be pleased to have him show her around. That was the genesis of the third novel in the series.

How Did You Come up With Your Characters?
In addition to my hero, Hunter Rayne, and the regular cast of Highway Mysteries characters, Alora Magee, the L.A. lawyer, was the first character chosen for Sea to Sky. Alora has been stalked by her ex-husband, Mike, who coincidentally is attending a conference in Whistler, and he brings along his family from Southern California, his coworkers, and a private investigator hired by someone in the aerospace industry. As usually happens when a murder has occurred, there are members of law enforcement involved in the story as well.

Book Sample
The DC-10 started its descent. Just as the captain had predicted, it was caught in a layer of turbulence and began to lurch from one rung of cloud to the next, rocking in between like a deranged teeter-totter some fifteen thousand feet above the ground.

Mike Irwin clenched his teeth as his wife clutched at his forearm, resisting the urge to shake her fingers loose. “Calm down, Kelly,” he said, not for the first time, trying not to sound as irritated as he felt. “We’re all buckled in for Chris’sake. Look at the stewardess. Doesn’t even bat an eye.” He nodded in the direction of the flight attendant making her way up the aisle toward their row of seats with a black trash bag, collecting plastic cups and napkins. He threw back the last of his scotch and soda, wishing there was time for one more.

Mike was on the right aisle, with two-year-old Corenna between him and her mother. The little girl was picking her nose. “Let go,” he said to his wife, pulling his arm out of her grasp. He leaned toward the little girl and gently pulled her hand from her face, held it up to his lips and made smacking sounds against her fingers. They were cool and sticky and smelled of the cookie she’d just eaten. Corenna giggled. “You’re not scared, are you, monkey?” She shook her head, smiling, proud of his approval.

The plane dropped again, and Mike’s stomach lurched. Corenna squealed, then burst into giggles again. “That’s my girl,” he said. “Just like the ‘throw me’ game, isn’t it, monkey?” He smiled and stroked her hair. He loved the feel of her, soft and smooth, and the way she looked at him with those large liquid eyes. Her tiny teeth were white and even. “That’s my girl,” he repeated.

Mike looked up and his smile vanished. From the seat to Kelly’s left, his five-year-old son Jordan searched his mother’s face with worried eyes, his mouth open like some kind of moron. Mike wanted to reach over and shake the kid, tell him to buck up, not be such a wuss. His first-born son was nothing but a momma’s boy. As if reading his mind, Kelly shot him a reproachful look and gave Jordan’s skinny shoulders an awkward hug.

“Lighten up,” Mike said, and looked beyond them, out the window. He saw a wall of mist, tumbling from grey to white and back to grey again. The plane was dropping through the cloud cover on the descent to Sea-Tac Airport. He shouldn’t have let Kelly make the arrangements but he’d been so busy at work getting ready for the conference, he hadn’t had time to see to it himself. “We should have flown directly to Vancouver and rented a car,” he said. “What the hell were you thinking?” He shook his head. “If I’d known you were going to make such a big production out of it, I would’ve gone alone.”

Kelly bowed her head and her face went slack. It was her hurt look. She looked that way a lot and he was getting pretty tired of it. He married her because she was young and sexy and he enjoyed being with her, but always acting hurt was affecting her looks. He should have known. If she was attracted to him because he was an older man and she thought he would protect her, that meant she was weak. He had thought that would be a good thing, to have a submissive woman, but it wasn’t. It turned him off.

No wonder he still thought about his ex-wife as much as he did. Alora was more of a match for him; a woman with strong spirit, she got mad instead of hurt. Funny, though, that imagining his ex-wife submitting to him was what turned him on. Although she’d only ever shown him anger and not fear, he knew that his ex-wife was afraid of him — why else would she keep moving and changing her phone number? — but still he fantasized about actually seeing that fear in her, touching it and smelling it, feeling it quiver in his hands and beneath his weight.

“We haven’t seen your parents since last Christmas,” said Kelly, tucking her hair behind her ear. It was blonder than the last time she’d had it done. Very SoCal and Mike liked it. He couldn’t remember if he’d told her so. “Your mom’s really excited about seeing the kids,” she said.

There were a few seconds of turbulence, which shut his wife up and made her grip the armrests until her knuckles turned white. Jordan grabbed her right arm with both of his dainty hands. Mike looked away, leaned back against the headrest and nodded to the flight attendant as she passed their row of seats, sure that she’d say no if he asked for another drink.

“If I wanted to see more of my parents, I wouldn’t live two states away from them,” he said, still looking up the aisle.

The turbulence subsided into small jiggles and Kelly relaxed a little. “You’ll be busy with your conference, Mike. The kids and I can spend time with your mom and dad. You said yourself we should take advantage of the free hotel.” She patted Jordan’s arm as he settled back into his seat.

Mike grunted. “Why the hell are we driving up from Seattle with them? They could’ve just met us there.”

“You said we wouldn’t need a car once we get to Whistler. The hotel’s right in the little village and you can walk to the ski hill, right?”

“Don’t whine. That’s where Jordan gets it from.” He pointed at his son. “Don’t you talk like your mom does. Ever. Understand?” The kid had a picture book on his lap. He wouldn’t look at Mike, just lowered his eyes and pretended to read. Mike snorted. Was there any point trying to change the kid? Defective. Too many genes from Kelly’s side. At least, from Kelly’s mother’s side. Kelly’s father had been a Marine, had served with Mike’s father and proven himself in Vietnam, fought in close combat and survived to talk about it. Kelly’s mother had OD’d on sleeping pills and left her twelve year old daughter to be raised by her father. He’d heard his own parents whisper about the woman and knew that she’d been too weak psychologically to cope with a soldier husband.

Mike thought about the time his parents had come down to LA and stayed at the house when Corenna was a newborn. He had thought it would be a good idea, having his mom there to look after Jordan while Kelly recovered from the delivery and got into a routine with the new baby. Mike spent one day at home visiting, then escaped to the office for as many hours a day as he could until they left. There had been tension, more than he’d expected. It pissed him off. It was none of his mother’s business, or his father’s, what happened in his house between himself and his wife, between himself and his son. He didn’t need anyone reproaching him, however diplomatically, for how he managed his own family. Next time they came, he’d booked them into a nearby hotel. Kelly had suggested renting a chalet at Whistler so all of them could stay together, but Mike nixed that idea in a hurry. Separate rooms. Separate floors.

And there was only one way he’d be able to stand the 230 mile trip from Sea-Tac to Whistler in his father’s Dodge van.

“Remember”, he said, reaching across Corenna and squeezing his wife’s upper arm to get her full attention. “I’ll have to drive.”