You are here: Home / Fiction / Mystery/Suspense / Scraps of Paper (prequel to All Things Slip Away) by Kathryn Meyer Griffith 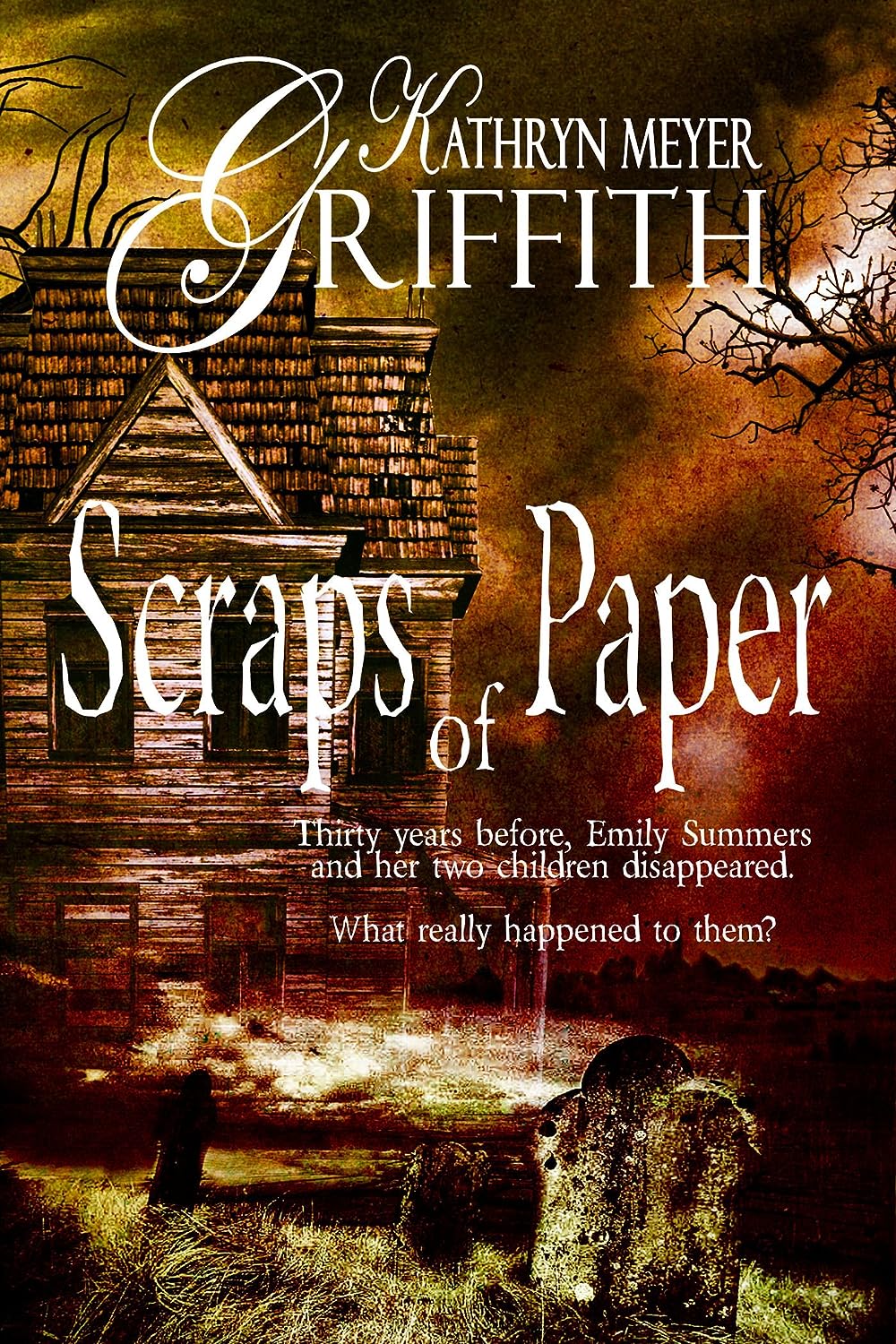 Abigail Sutton’s beloved husband walks out one night, doesn’t return, and two years later is found dead, a victim of a long ago crime. It’s made her sympathetic to the missing and their families.

Starting her new life, Abigail moves to small town and buys a fixer-upper house left empty when old Edna Summers died. Once it was also home to Edna’s younger sister, Emily, and her two children, Jenny and Christopher, who, people believe, drove away one night, thirty years ago, and just never came back.

But in renovating the house Abigail finds scraps of paper hidden behind baseboards and tucked beneath the porch that hint the three could have been victims of foul play.

Then she finds their graves hidden in the woods behind the house and with the help of eccentric townspeople and ex-homicide detective, Frank Lester, she discovers the three were murdered. Then she and Frank try to uncover who killed them and why…but in the process awaken the ire of the murderer. ***

What Inspired You to Write Your Book?
I’ve been a writer for over 42 years and have published horror, romance and time travel paranormal…but I have always LOVED murder mysteries, so I wrote SCRAPS OF PAPER and its sequel ALL THINGS SLIP AWAY.

How Did You Come up With Your Characters?
They just came to me. Two or three main characters, an artist and an ex-cop and a small town full of quirky characters…and a 30 year old missing persons mystery that turns out to have been…murder.

Book Sample
While cleaning the baseboard in the living room, she noticed it was loose and had the hammer in her hand ready to nail it down again when she spied a scrap of paper sticking out from behind the piece of wood.

Such a simple act, yanking at that slip of paper, but it would change everything. Pulling it carefully from its hiding place, she saw it was a tightly folded and yellowed scrap of white paper laced in spider webs and dust. The sort of white drawing paper she used to sketch on as a child. She unfolded it slowly. There was printing on it, bright red crayon scribbling as a child might do. At first Abigail wasn’t sure what it was. Then she looked closer and read:
ME AND CHRIS ARE SO SCARED. HE WAS MEAN TO MOMMY AGAIN, MADE HER CRY. HURT HER. WE HATE HIM!!! in a childish scrawl. There was a J at the bottom.

She stared at the scrap of paper and reread it. It was obviously old. No telling how long it’d been behind the baseboard. She refolded it and tucked it into a compartment of her purse. The two children’s names who’d once lived there, if she recalled correctly, had been Christopher and…Jenny. Amazing, the note could have been from them. How strange, after all these years, for her to find it. But who was HE?

Abigail couldn’t stop dwelling on the note as she resumed her work. She made it a point to search for other scraps of paper sticking out from hidden places. A treasure hunt. By the early evening, when she had to quit painting for the day because her body refused to move, she’d uncovered yet another scrawled note in red crayon, all caps, similar to the first one from under the baseboards.

It said: WE WENT TO BED AGAIN WITHOUT SUPPER. SHE WAS MAD. I AM SO HUNGRY. C
Was it from Christopher? She put the note in her purse with the other one. She was trying not to feel sorrow for the mistreated children. After all it had been so long ago. But she couldn’t stop thinking about them and what these notes meant. Had they been abused and in danger? From whom? And why should it bother her so?***

Since childhood I’ve always been an artist and worked as a graphic designer in the corporate world and for newspapers for twenty-three years before I quit to write full time. But I’d already begun writing novels at 21, over forty years ago now, and have had eighteen (ten romantic horror, two romantic SF horror, one romantic suspense, one romantic time travel, one historical romance and three murder mysteries) previous novels, two novellas and twelve short stories published from Zebra Books, Leisure Books, Avalon Books, The Wild Rose Press, Damnation Books/Eternal Press and Amazon Kindle Direct.

I’ve been married to Russell for almost thirty-five years; have a son, James, and two grandchildren, Joshua and Caitlyn, and I live in a small quaint town in Illinois called Columbia, which is right across the JB Bridge from St. Louis, Mo. We have three quirky cats, ghost cat Sasha, live cats Cleo and Sasha (Too), and the five of us live happily in an old house in the heart of town. Though I’ve been an artist, and a folk singer in my youth with my brother Jim, writing has always been my greatest passion, my butterfly stage, and I’ll probably write stories until the day I die…or until my memory goes.