You are here: Home / Fiction / Mystery/Suspense / Saving Ferris by A R Kennedy 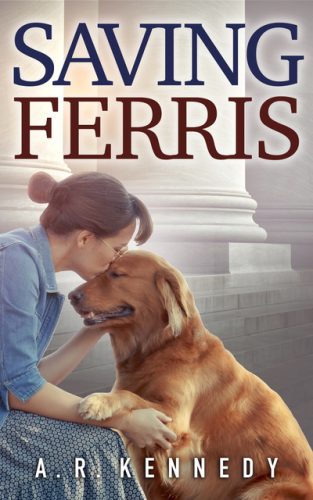 Cecilia faces murder charges for killing an intruder threatening her dog. The law says Ferris is property but Cecilia is learning he’s family.

What Inspired You to Write Your Book?
At a writing conference, I learned about self defense laws. Particulars vary by state but someone can protect themselves or another person in self defense but not property. The very next class was about K9 officers, where I learned a police dog is considered property of their police department. Through further research, I learned dogs (and other pets) are considered property. Ferris was born!

How Did You Come up With Your Characters?
My stories all start with a "What if?". From there, based on choices made, a character is born.

Book Sample
Cecilia woke up. She’d never get used to the darkness of country nights. She rolled over to return to sleep and heard the noise that must have been the cause of the early wake-up call. A small yip from the window. She mumbled her displeasure and slapped her husband’s side of the bed.
“Joey, wake up.” No response. “Joey.” She reached for him again and found nothing but his cold pillow. A small yip again. “Dumb dog,” she mumbled. She was fully awake now, remembering why her husband’s side of the bed was empty. Why it would forever be empty.
Cecilia sat up at the edge of the bed and hung her head. She no longer wanted to be in the empty bed. A low growl emanated from the dog. “Okay, Ferris. I’m coming.”
She snapped on a nightlight and shielded her eyes from the small, yet bright, light. In the city, she could have seen the bedroom without such an aid. Some people called it light pollution. Cecilia called it the life of the city.
She could make out the profile of Ferris, staring out the window onto their backyard. He stood tall enough that his head rested on the windowsill. She often found the golden retriever looking out any window of the house like this. Waiting for Joey to return, she assumed. She had done it for weeks too.
But tonight, he stood at alert.
“Do you want to go out or what? Remember, I’m not the one who likes you, so hurry up.”
He turned his head briefly and looked at her, then returned his attention to the backyard. “I am not taking you out in the middle of the night to chase a squirrel.” The backyard’s motion sensor light was on and she cursed the squirrel that must have triggered it.
She started to lie back down and return to her dreamless sleep. The dreams, in reality and in sleep, had disappeared with Joey. The call of nature diverted her and she headed to the bathroom instead.
With the door to the hallway open and the rest of the house now available, Ferris took off and ran down the stairs. “I’ll take that as I got to go now too, woman.”
Putting Ferris’s bathroom needs before her own, she followed him downstairs to the kitchen’s sliding glass door, his exit to the spacious backyard. It was far more likely he’d have an accident than she and she didn’t want to spend the rest of the night cleaning up his mess.
She snapped on the kitchen light. Now that she was fully awake, the light no longer caused discomfort. She doubted she’d return to sleep again tonight anyway.
“Calm down,” Cecilia told the dog as she struggled to put on his leash. “I know Joey lets you run around but I’m not chasing you at two in the morning.” It was no surprise that Ferris continued to move. Listening was not his forte. It was how he got homed here.
Cecilia finally got the camouflage leash on Ferris’s collar and opened the sliding glass door. Ferris squeezed through before she had it fully open, pulling her through as well. An alarm beeped and she reached for the doorframe to stop her momentum. “Ferris, come on!”
Ferris had a lot of flaws but pulling her on their walks was not one of them. Holding the leash in one hand and firmly placing her foot over the doorframe, she quickly punched in the alarm code. The incrementally louder and faster beeping stopped. She stepped onto the patio and Ferris pulled her onto the backyard’s grass. “You really are a pain in the tush tonight.”
The motion light flicked on as Ferris pulled her into the middle of the yard. He stopped and surveyed what Cecilia figured he imagined as his kingdom. Again, he was in high alert.
She looked around the yard but could only see as far as the backyard’s light illuminated. She couldn’t see the fence that ran around the acre of land. She couldn’t see her closest neighbor’s home. She couldn’t see anything but Ferris. And her breath in the cool night air.
“What’s wrong with you?” She patted him on his back. Usually when she petted him on his back, he squirmed in glee. Tonight, she didn’t think he even noticed the touch.
With the damp grass soaking through her socks, Cecilia wished she had put on shoes. The chill ran up her body and she regretted not putting on a jacket as well. Joey’s T-shirt and boxers did little to keep her warm. Hoping to generate a little warmth, she told Ferris, “Come on, one lap and we’re back in.” Several pulls on his leash yielded no movement. With no motion, the yard’s light flipped off. Suddenly engulfed in darkness, Cecilia let out a short scream.
Ferris twirled around, yanking Cecilia with him. As the light flipped back on, Cecilia screamed again.