You are here: Home / Non-fiction / Run Gently Out There by John Morelock 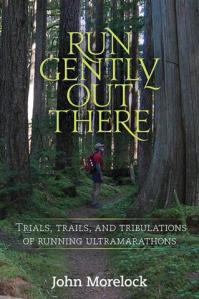 The journey from running on roads to running trails and then to the pauses along the way as what was seen needed to be appreciated unfolds in no particular order. The miles of trails led to encounters with rocks and birds; trees, both large and small; ferns, mosses, and lichens underfoot caused me to bend and inspect; the whys and wonders of tidal rises and falls were read about–fogs and clouds were above and below; cacti in the desert dryness, redwoods in coastal fog– pauses in the 118º heat of Death Valley and (short) pauses the 44 degrees below zero cold of the Turtle Mountains of North Dakota — every step out the door led to a new adventure of seeing what was out there. As what I saw was learned (a little) a few more words were written so I could share a love I have for being out there.

What Inspired You to Write Your Book?
The people who commented about my writing being able to put them on the trails, at the beach, alongside a river, or under a starry sky with me. The many disjointed conversations as a walk, run, or pause to see took place lead to an unstructured collection of… essays would be kind, but close. I wrote because I love being outside. As time passed, the gift of having others enjoy reading my scribbling led to this collection of old and new.

Book Sample
Lambs, Llamas, Trilliums…(The Passing of Spring in a Land Far Away)

How many words for gray? Ashen, sooty, pearly, silvery, dove gray, tattletale gray, darkening, foreboding, silver haired, even fuliginous or grizzled. The waters of Puget Sound were having troubles deciding what shade to be today. I was on pavement, trying to get from one wooded park to another and then onto the trail to the house.

Blues were trying to break through the upper layer of clouds, or were the clouds trying to close ranks to hide the blue sky? I zipped the front of my tattered Windbreaker as I passed the pasture with the llamas. Some time back there were llamas on Hope Pass ‘neath a sky more blue than gray. I needed to top the hill so I could pretend to pick up the pace and warm my legs again. Cold has colors, too, mostly behind darkened doors. Grays and pale blues don’t warm legs. Gloves had been put back on as salt spray touched me.

Anything would have brightened the run. One of those runs that is just a mile or two too long. Lambs? I didn’t want lambs playing next to the fence as I trudged past. I wanted…What? Sympathy?

Yes, a display of commiseration would work.

I got lambs. Silly leaping lambs. Now they were playing with the baby llama. Lambs standing on their mother’s back. Oh great, then the wind died and it was warm. A hundred yards to the trailhead; wild roses spread pinkish polka dots to tell me where to turn. Car noises died as I escaped into the woods again.

There was no gray in my woods, and I saw only patches of blue as I looked up through the cedars and madrones. We saw trilliums and dogwoods two weeks ago, gone now as the leaves had thickened. Summer was coming. Canada geese were in large number on Wednesday, singing their way north. Cormorants were returning, and the harlequins were gone to their mountain homes.

The unwanted two miles were lengthened as I turned to the Old Men, and footsteps fell away as the dirt of the trail became the needles of a thousand years. Through the darkness of the cedars’ thickly needled branches came slashes of light. Turning at the fork, I retraced the steps just made. Steps not mine anymore were set quicker now, legs of my youth, many years gone away, stretched out, and I smiled briefly as trudge became run, shoulders relaxed, and ground was covered; once more I felt I could run forever. If I had time, but I don’t know what color time is.

About the Author:
Widely unacclaimed as a writer, bearer of bad jokes, person who pauses a lot when outdoors, and possessing a poor memory for what went wrong last time, John Morelock is currently an almost retired whale spotter, mirage analyst, baker, wool gatherer, maintainer of trails, and nature lecturer. Morelock took up running, walking, hiking, backpacking, and, most important, noticing what was around him while out there on August 17, 1984 at 4:33 in the afternoon and completed his first ultramarathon in January of 1986. He has long since completed several more ultramarathons, many longish walks, several hikes, but no unicycle rides; most of them in the Pacific Northwest, but also in places as diverse as Texas, Colorado, Tennessee, North Dakota, and Arkansas.

He established his trail navigation credentials early by successfully returning to the trailhead where he had left the car on many outings in the Olympic and Cascade Mountains. Although largely unfocused as a racer, he managed a victory in each of his first two decades of running, one at the 100k distance and one at the more standard 34.5 miles. In early 1986 he paused to take note of a rather large redwood tree alongside the trail. This pause led to seeking answers to what was being seen as he walked, strolled, sauntered, ran, ambles, rambled, or moseyed along. In 2002 he noted that his total miles or wandering here and there had reached 50,027. Having accomplished this feat without once kicking or tripping over a porcupine he reasoned that it was a good point at which to quit tracking such things.

Now, with time slipping by, philosophical meandering and trailside distractions have led to less running and more pauses to see, note, and learn about the beauty of that which is around us. He lives on Whidbey Island in Washington state enjoying the trails with his wife, Kathy, who took him on a different ultraadventure in 2004; a 600ish mile pilgrimage across Spain during which he once helped the nuns at a monastery in León, Spain, bake the morning’s bread–a wonderful day in León.