You are here: Home / Fiction / Action & Adventure / Rise of the Anshar by C.W. Hambleton 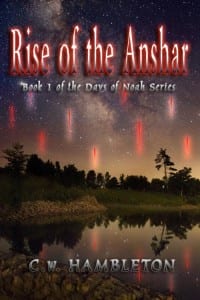 Myths. Legends. Ancient lore. Primeval stories buried deep within the memories of the earliest civilizations of mankind. Even today, many cultures retain the distant longing for a lost paradise, tales of a worldwide flood, and legends of a tower of confusion. Yet too few of us ask if the legends are true.

This is a story of the First Age, when dragons and giants freely roamed the earth and mankind lived for hundreds of years. Paradise was fresh in their memories and still sought by those who yearned for it. The earth was young, unmarred, and bountiful — and ripe for subjugation by men, beasts, and demons.

The first great struggle for mankind’s fate has been won, but in the middle of the First Age, a new threat is rising as ancient enemies seek to reclaim what they lost. And this time, the enemies of mankind will not accept defeat.

What Advice Would You Give Aspiring Writers?
One big piece of advice is to read “Self-Editing for Fiction Writers” before writing your manuscript. I found I spent far too much time describing scenes and settings to the reader instead of showing them through the eyes of the characters. I used to have a big issue with “telling” instead of “showing”, which I’m getting better at. The trick of seeing and writing novels from the perspective of a camera was a big help in improving my books.

The second piece of advice would be to not try to get the manuscript perfect during the draft-phase. There’s no such thing as a perfect draft or manuscript, and like bugs in software, there will always be “one more revision.” I find that whenever I encounter something in my work-in-progress that starts to interfere with my flow of thought or writing, I put a TODO note such as “(TODO: fix/add something here!)” and then continue on with writing. This goes for clumsy dialogue, bad beginnings/endings, or anything else that fosters writer’s-block. I will typically have 50-100 TODOs in every draft that I’ll go back and fix later.

Author Bio:
Chris Hambleton resides in Denver, Colorado where he is employed as a software developer and consultant. He has authored more than a dozen books, as well as developed several websites, software applications, and written software-related articles. His other interests include hiking, studying the Bible, reading American history and politics, along with devouring good fiction books. Recently, he has been learning to enjoy classical music.

What Inspired You to Write Your Book?
I’ve always been interested in history and the ancient world. In 2005, I took up an interest in studying the Antediluvian Age and the Ice Age that followed. I looked around for a book that accurately portrayed it, and since the few I found (at the time) weren’t what I was looking for, I decided to go off and write my own. A few outlines later, I found that I had come up a framework from which many books could be written.