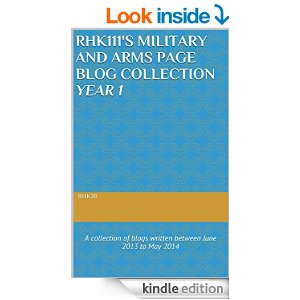 A collection of defense blogs related to the Philippines written on my website between June 2013 to May 2014. Below are the topics/titles contained in this edition:

– China, At War with Its Closest Neighbors in the South China Sea

– MANPADS as CIWS for the Philippine Navy

– I-Hawk or Hawk XXI SAMs for the Philippine Army?

What Inspired You to Write Your Book?
The current tensions with China in the West Philippine Sea and the ongoing modernization of the Philippines’ Armed Forces inspired me to make these series of blogs and ultimately collect them for this book.

Book Sample
From the section/blog “MISSILE BOAT NAVAL BATTLE LESSONS”:
I decided to write about modern Missile Boat naval battles because it is not a common topic, you are more likely to read or watch topics involving wars like World War 2, or the Vietnam War, etc. than topics like this. Part of the reason its not so common is probably because modern naval engagements don’t last very long, usually only days, hence you can’t generate a lot of material about them unless you collect them up like what I’m doing now. As to why the topic of Missile Boats, its because these boats are smaller and cheaper than other naval platforms out there like Submarines, Frigates, etc. and thus acquiring them would be a cost-effective way of modernizing our navy.
But first, what is a “Missile Boat”? Wikipedia defines it as, “a small warship armed with anti-ship missiles”. That’s a pretty general term as it doesn’t really specify what “small” means. For me, though, it means ships which are under 1,000-tons as we do need to draw a line somewhere. This will also mean covering missile-armed crafts usually described as “Corvettes”, though, but I will be referring to them as Missile Boats also. The term “Fast Attack Craft” can also be used, but it is a more general term in that it can also be used to describe ships armed with other weapons like Torpedoes or guns-only, while there is no mistaking what a Missile Boat is supposed to be armed with.
The Soviet Union pioneered the use of Missile Boats when it pressed into service the Komar-class Missile Boats armed with SS-N-2 Styx missiles (Soviet designation is P-15 Termit) in 1956. For more information about the boats, ships, weapons, battles, etc., please refer to the “References” section at the bottom of the page.
‘Battle Examples’
I initially wanted to use a thesis by the US Naval Postgraduate School titled, “An Analysis of the Historical Effectiveness of Anti Ship Cruise Missiles in Littoral Warfare” as my main source for the battles, but upon double checking I found that some details or information contradict with what’s available now (an there are even some downright errors). The thesis was written 20 years ago in 1994, and it seems some of the information published since then are already outdated or obsolete. Hence I decided to just discard it and use sources that I can at least cross reference with other sources.
There a number of modern battles involving Missile Boats, but I decided to narrow them down by using the following criteria:
– Naval Battles that involved at least one Missile Boat
– Only actual kills were counted, those that were only damaged and not sunk/killed off or scrapped afterwards were ignored.
– Only kills on armed combatants were considered, kills on unarmed transport or cargo vessels were ignored
– Only kills involving missiles were considered, like missiles-only or gun-and-missile combination were considered. Guns-only kills by Missile Boats were ignored.

About the Author:
I am an avid fan of Defense-related stuff, Blogger and Hobbyist. My main blog, “rhk111’s Military and Arms Page” has been getting pretty good traffic so far in its 1 1/2 years of existence.