You are here: Home / Fiction / Revenant 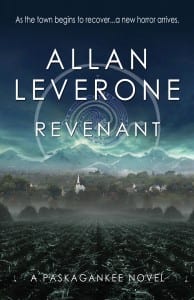 A sacred Navajo artifact, imbued with a shocking and dangerous power.

An amoral con man, willing to stop at nothing to achieve his goals.

And a tiny northern Maine town, isolated and vulnerable.

Now, just as the pair – and the town – is beginning to recover, a new horror comes calling.

Billionaire Seattle software designer Brett Parker is in Paskagankee to check on the progress of his newly-constructed summer retreat. But he’s not the only new resident in town. Max Acton, murderous sociopath and Arizona cult leader, has gained possession of a long-hidden sacred Navajo artifact with the ability to reanimate the dead.

Acton aims to use the stone in a murderous plot to kidnap Parker and steal his revolutionary new software design developed for the U.S. Department of Defense, selling it to the highest bidder and making millions. He doesn’t even need to get his hands dirty. All he needs is a victim to kill . . . and reanimate . . . and force to do his bidding.

All he needs is a revenant.

And the revenant is angry. And he’s deadly. And he’s unstoppable. And the town of Paskagankee will once again become a battleground between the living and the dead . . .

Allan Leverone is a 2012 Derringer Award winner for excellence in short mystery fiction, as well as a 2011 Pushcart Prize nominee. He is the author of four novels, including the Amazon Top 25 overall bestselling thriller, THE LONELY MILE. Allan lives in New Hampshire with his family and a cat who has used up eight lives.