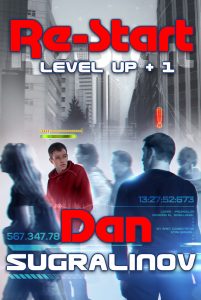 At thirty years old, Phil is an unemployed gamer who struggles to make ends meet. His only source of income is freelance writing (when he feels inspired enough to add another article to his less-than-popular blog). His wife has just walked out on him, leaving him without money, purpose, or food in the fridge.

On the day his wife dumps him, Phil receives a mysterious piece of wetware. A game interface seems to have been implanted in his brain which allows him to see the world through the eyes of an RPG player.

Now that Phil discovers his real-life stats, he can see they’re far below average. With 4 pt. Agility, 6 pt. Strength and 3 pt. Stamina, his most advanced life skill is predictably gaming.

Luckily, real-life stats can be leveled up just like virtual ones. But will it help Phil get his wife back? Can he stop being such a couch potato? Would the new game help him become fitter? Or more successful? Can his gaming skills finally come in handy in real life?

Last but not least, can he find out who could have uploaded the mysterious game to his brain? And how is he supposed to deal with this unknown but apparently omnipotent force?

What Inspired You to Write Your Book?
The idea of augmented reality isn’t new. The Google Glass project is in fact nearing its completion even as we speak. But the idea of digitized real-life stats, that’s a bit different. I had it in summer 2014. At the time, I was working hard trying to lose weight from my original “too-fat-to-tie-laces” 242 lb. to my current 175 lb. These days, I can’t even imagine my life without going to the gym.

It was in the gym that I first realized how effective weight training could be.Today you lift 45 lb, a week later it’s 55 lb, and six months later, it’s already 175! Or, speaking in RPG terms, you level up Strength from 2 to 8.

Then an idea struck me. What if we could see all these status bars, skills and characteristics in real life just as we can in MMORPG? It’s one thing to know you’ve learned something from a book – and it’s something quite different if you can clearly see that it’s added +2% to your Intellect. Or that a visit to a swimming pool gives you +5% to Stamina. Would that motivate you more?

I’m absolutely sure it would. This is exactly why I’ve always loved RPG and LitRPG as well as weight training. Three years ago, I couldn’t do a single pull up. Now I can do fifteen easily. It’s the same in business: whether you work your backside off or just go through the motions, your company’s earnings are the only accurate barometer of your activity.

I spent some time thinking about it until it all fell into a pattern. That’s when I came up with my MC Phil Panfilov and his story. I mapped out his development arc, added some key scenes, came up with support characters and started writing.

That’s how I finished "Level Up. Re-Start", the first book in a series which tells the story of a gamer who’s been a bit too lax with his life. By the time he’s thirty-something, he has a wife, a string of one-off freelance gigs, a powerful computer, a level 110 rogue character in a popular RPG game and a beer gut.

What could happen in the life of an overgrown nerd in order to change his attitude? Could his wife – whom he loves a lot – leave him? Or what if he somehow could see the world through a game interface? Would he be able to face the harsh reality if he could see that his Reputation with his wife is Unfriendly, his Agility is stuck at 4, Strength at 6, Stamina at 3 and that his most advanced skill is WoW playing? Isn’t it time he did something about it?

That’s basically a glimpse into my story which I wanted to share with my English-language readers. The finished book has already hit the bestseller list back in Russia. The English translation of first book in the series is available in KU.

How Did You Come up With Your Characters?
What if you could wake up one morning and discover you were looking at the world through the interface of your favorite MMORPG? Suddenly you can see people’s names and monitor your Reputation with them. You can identify objects and even locate them on the built-in map. An unknown piece of wetware in your brain rates your every action, issues quests, and rewards you with XP and new levels. It even bestows some very special abilities upon you.

Book Sample
Alik startled and looked around him. “Wassup, man? You alright? Tell me! What the f-”

“No, wait,” I raised my hand and ran it above his head.

I couldn’t feel anything. Still, I could see it!

My breath seized. I couldn’t take my eyes off a big inscription in clear green letters hovering over his head.

Romuald? His parents had some sick sense of humor. Had my name been Romuald, I’d have probably turned to the bottle too.

“Is your name Romuald?” I asked.

He startled again. “’xcuse me?”

I didn’t reply. My thoughts were racing like a herd of wild horses, trampling everything in sight.

This wasn’t real. Couldn’t be. A hungover hallucination, maybe. Drinking too much. Playing too much, sleeping too little.

I focused on the inscription which obligingly unraveled like a parchment scroll.

The last line flashed red. I focused on it, hoping to unravel it as well. Didn’t work.

The message folded back in, its lone top line still glowing in the air.

He shrugged. “Dad’s idea. His grandfather was apparently Romuald. Why?”

“I don’t think you have,” he agreed with a suspicious ease. “Listen… I’ve got things to do. I’ll see you around.”

He heaved a sigh, then swung round and began to walk back.

He turned and stuck out a quizzical chin, “What now?”

“How old are you, twenty-eight?”

He nodded and walked off. The inscription continued to hover over his head, growing smaller in size as he moved away until it disappeared completely.

I didn’t risk following him even though I was dying to find out whether it might work with the others too. I could kill for a smoke. I crossed the backyard and walked out onto the street.