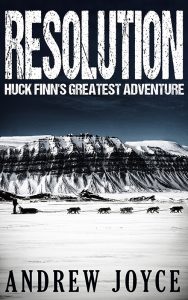 It is 1896 in the Yukon Territory, Canada. The largest gold strike in the annals of human history has just been made; however, word of the discovery will not reach the outside world for another year.
By happenstance, a fifty-nine-year-old Huck Finn and his lady friend, Molly Lee, are on hand, but they are not interested in gold. They have come to that neck of the woods seeking adventure.
Someone should have warned them, “Be careful what you wish for.”
When disaster strikes, they volunteer to save the day by making an arduous six hundred mile journey by dog sled in the depths of a Yukon winter. They race against time, nature, and man. With the temperature hovering around seventy degrees below zero, they must fight every day if they are to live to see the next.
On the frozen trail, they are put upon by murderers, hungry wolves, and hostile Indians, but those adversaries have nothing over the weather. At seventy below, your spit freezes a foot from your face. Your cheeks burn—your skin turns purple and black as it dies from the cold. You are in constant danger of losing fingers and toes to frostbite.
It is into this world that Huck and Molly race.
They cannot stop. They cannot turn back. They can only go on. Lives hang in the balance—including theirs.

Targeted Age Group:: 13 and Up

What Inspired You to Write Your Book?
It all started way back in 2011. My first book was a 164,000-word historical novel. And in the publishing world, anything over 80,000 words for a first-time author is heresy. Or so I was told time and time again when I approached an agent for representation. After two years of research and writing, and a year of trying to secure the services of an agent, I got angry. To be told that my efforts were meaningless was somewhat demoralizing to say the least. I mean, those rejections were coming from people who had never even read my book.
“So you want an 80,000-word novel?” I said to no one in particular, unless you count my dog, because he was the only one around at the time. Consequently, I decided to show them City Slickers that I could write an 80,000-word novel!
I had just finished reading Mark Twain’s Huckleberry Finn for the third time, and I started thinking about what ever happened to those boys, Tom and Huck. They must have grown up, but then what? So I sat down at my computer and banged out REDEMPTION: The Further Adventures of Huck Finn and Tom Sawyer in two months then sent out query letters to agents.
Less than a month later, the chairman of one of the biggest agencies in New York City emailed me that he loved the story. We signed a contract and it was off to the races, or so I thought. But then the real fun began: the serious editing. Seven months later, I gave birth to Huck and Tom as adults in the Old West. And just for the record, the final word count is 79,914. The book went on to reach #1 status in its category on Amazon—twice. And it won the Editors’ Choice Award for best Western of 2013. The rest, as they say, is history.
But not quite.
My agent then wanted me to write a sequel, but I had other plans. I was in the middle of editing down my first novel (that had been rejected by 1,876,324 agents . . . or so it seemed) from 164,000 words to the present 142,000. However, he was insistent about a sequel, so I started to think about it. Now, one thing you have to understand is that I tied up all the loose ends at the end of REDEMPTION, so there was no way that I could write a sequel. And that is when Molly asked me to tell her story. Molly was a minor character that we met briefly in the first chapter of REDEMPTION, and then she is not heard from again.
So I started to think about what ever happened to her. After a bit of time—and 100,000 words—we find out what did happen to Molly. It is an adventure tale where Huck Finn weaves through the periphery of a story driven by a feisty female lead. Molly Lee was my second book, which achieved #2 status on Amazon.
Now I was finished with Huck Finn for good. Now I could go back to my first novel and resume the editing process.
But not quite.
It was then that Huck and Molly ganged up on me and demanded that I resolve their lives once and for all. It seems that I had left them hanging—so to speak. Hence, RESOLUTION: Huck Finn’s Greatest Adventure.

How Did You Come up With Your Characters?
I had just finished reading Mark Twain’s Huckleberry Finn for the third time, and I started thinking about what ever happened to those boys, Tom and Huck. They must have grown up, but then what? So I sat down at my computer and banged out REDEMPTION: The Further Adventures of Huck Finn and Tom Sawyer in two months then sent out query letters to agents.

Book Sample
Molly took a sip of whiskey and asked, “So what changed your mind about us?”
“It was your friend, Mister Finn there. He had to go and poke his nose into something that was none of his concern.”
Molly sighed, “He does that a lot.”
Huck was anxious to get the ball rolling, but he wanted to know one more thing. “We ran into a man about twenty miles down trail. He didn’t have much to say because he was frozen solid. Could it be that you knew him?”
“You must be talking about Jake Early. Was he wearin’ a red flannel coat?”
“Yup.”
“The poor man made a run for it after he refused a drink, and Al had to draw his gun. But it was too cold to go chasing after him. We figured he wouldn’t get far ’cause we had his parka and kit. Twenty miles, you say? Reckon he had a bit more in him than we thought. It’s a good thing he was beyond talkin’ when you came across him.”
“Yeah, just great.”
Huck, tiring of the conversation, picked up the bottle and filled his and Molly’s glasses. Jass’ was still full. “Alright, Mister Knight, how do you plan on doing it? Take us out back and shoot us? Or have us drink something that will make us sleep?”
“I must say you are taking this like a gentleman. No crying or begging for mercy?”
“Would I get any?”
“Any what?”
“Mercy.”
“Most likely not.”
“Didn’t think so. But seeing as how I was the one that went snooping around, how about letting my friends go? There ain’t no law in these parts. No constables will come after you.”
“That’s enough!” shouted Loew. “Nobody goes. I say we shoot the geezers now and keep the woman for later. Whatcha think, Frank . . . Al?”
Al sipped his whiskey, and nodded his agreement while keeping his Colt pointed at Huck.
Frank had had his fun. “You’re right. The woman we definitely keep. Sorry gents, but would you mind standing up? We’re gonna go outside. We don’t want no blood on the floor or Miss Molly would have the unpleasant task of cleaning it up.”
Jass stood up, but Huck stayed where he was. “Maybe we can make a deal. You were wrong about us not having much gold. We got thirty-five pounds of nuggets on the sled.”
Immediately upon hearing that news, Vance and Loew laid their guns on the table and ran out the door without even putting on their parkas. Knight picked up his Colt and waited.
The door burst open and the two came in carrying the skins that held the gold. They went to Knight and poured the contents of one of the skins onto the pine surface of the counter. That distracted Knight. The three of them were mesmerized by the deep-yellow brilliance reflected in the dim light of the slush-lamp.
Huck looked at Molly and nodded.
She stood with such force that she knocked her chair backwards and it started to fall. She had her gun out and in her hand before the chair hit the floor. The scraping noise of the chair as Molly stood turned the men’s attention from the gold to the table. It was the last act of their lives. Molly had a bullet into each one of them before they knew they were dead.
Jass couldn’t believe it. He took the bottle of Three Star, tilted it to his mouth and drank a goodly portion. Then he sat down and wiped his brow. In spite of the cold, he had been sweating. Huck went to Molly and gently touched her cheek with the back of his hand. “Good girl,” was all he said.