You are here: Home / Faith and Religion / Religion of Question a Question of Religion A Preliminary Look At Comparative Religious Studies by Lion Blyden 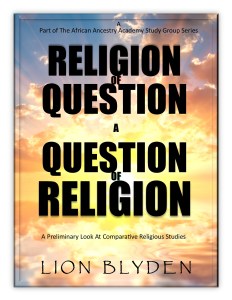 for your intellectual journey through spiritual and religious history. Raising several, sometimes controversial questions, and introducing little discussed, and often times, little known facts about religion. This work was originally a composition and compilation of notes, thoughts and philosophies, these are some of the religious and spiritual belief systems that I have studied throughout my life. My goal for this book was to spark questions and dialogue about what you think you don’t know and what you think you know. The point of this collection of information, is to broaden the viewpoints, add to the knowledge base of the reader, and to raise questions that don’t always get raised.

Primarily this book can be used as sort of a study guide, taking the terminology and vocabulary used in this work and using them as a starting point for your own quest for knowledge.

What Inspired You to Write Your Book?
The things found in these pages were first put together for the purpose of a study group I was conducting. It dawned on me, while organizing my notes, that this information could serve me better in book form. The ablility to have a quick reference to certain comparisons, talking points and inquiries into origins, originators, important figures and practices of different world cultures.

How Did You Come up With Your Characters?
non-fiction

Book Sample
“Ancient faiths and traditions were very sacred to the original devotees to these thought processes. Obviously, these beliefs and cultures had to be preserved. Oral history is how most traditions around the world were originally kept. One can just imagine, an old grandmother with a granddaughter at her feet, and her baby grandson on her lap. The fire burning, keeping them warm in the night air, as she rocks slowly, telling them stories of when she was young. This is how the Twa of Southern Africa, the Native Americans, and the ancient Cushites among many others passed along the first spiritual beliefs and practices, probably some good recipes too.”

About the Author:
A student of life, author Lion Blyden has an extensive history with education. Nearly 20 years of experience working with at-risk youth, Blyden has mentored over 300 children. Blyden is also the founder of the African Ancestry Academy, A study group format dealing with Ancestry, African-American History, African History and Spiritual History.