You are here: Home / Fiction / Recovery 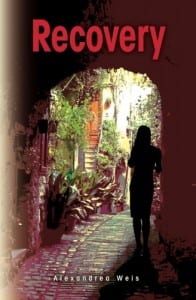 Once a darling of New Orleans society, Nicci Beauvoir pens a novel about her departed love, the artist David Alexander. While promoting her book in the Big Apple, she’s approached by David’s former boss, Simon La Roy, who has a theory about David’s death that devastates Nicci. She learns David’s murder may be linked to someone from her past. Enter Dallas August, an elite member of Simon’s organization of corporate spies prized for his ruthless ability to get the job done. Playing the part of Nicci’s lover, Dallas returns to Katrina-ravaged New Orleans with her to flush out the killer. But everything is not what is seems in the Big Easy, and soon the couple finds themselves trapped in a psychotic’s twisted game of revenge. As the danger grows, Nicci’s relationship with the handsome spy turns from adversarial to amorous. On the run for their lives, Dallas and Nicci must confront their tormentor before it is too late. It’s a deadly decision that could cost Nicci everything, but it is her only chance for finally revealing the identity of the murderer. Just as the truth behind David’s death is discovered, another more compelling mystery is unearthed. It’s an unexpected turn of events that rocks Nicci’s world.

Alexandrea Weis is a registered nurse from New Orleans who has been published in several nursing journals and textbooks. She has been writing novels and screenplays for over twenty years. Her first novel, To My Senses, was a finalist for commercial fiction in Eric Hofer Book Awards, a finalist for romance in the Foreword Magazine book of the Year awards, and a finalist for romance in the USA Book Awards. Her second novel, Recovery, won the Gold Medal for best romantic suspense from The Reader’s Favorite Book Awards and was named best Romantic Suspense by the NABE Pinnacle Book Awards in 2011. Her third book, Sacrifice, closes out the Nicci Beauvoir Series. Her fourth book, highlighting her love of rehabbing wildlife, called Broken Wings, is now out in paperback and ebook.