You are here: Home / Faith and Religion / Spiritual Growth / Read of You by Roy Manuel Ramirez 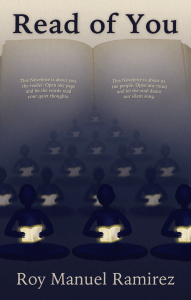 A piece of literacy unfolding itself in our modern era of architectural creativity. A philosophical novelette of an epistemological poet that reveals our psychological abnormalities built from circumstantial subjectivities through an affirmative and innovative writing style wittingly unmatched. Read of You will survive the test of time in an existentially poetic pursuit of understanding ourselves.

What Inspired You to Write Your Book?
To help develop the minds of ourselves and our future children. To give insight to the mind of a poet.

About the Author:
Roy Manuel Ramirez was born and raised in South Central, California, USA, with the largest Latin American gang, “Florencia 13.” Both his parents were heroin addicts who continuously went in and out of prison, while the other eighty percent of his family spent their life behind bars. At the age of twelve, his twenty-three year old brother took him away and raised him. Roy was a curious student and devoted athlete but ended up dropping out of high school in eleventh grade due to depression. He ended-up working low-wage labor jobs until his discovery of poker. Five years later as a professional poker player, he still felt no real life value and joined the US military, later being discharged for becoming a conscientious objector and pacifist. His father became a psychologist but couldn’t cure his own son, so he spent most his time in bookstores, in the self-help, philosophy, and metaphysic sections trying to cure himself from emotional-destitute and self-failure. He soon decided to search for truth in the universe by living an ascetic lifestyle in pursuit of finding oneness. He gave up the use of money while studying ontology and theology through empirical measures on his journey. He is mentioned in the book The Man Who Quit Money by Mark Sundeen for his apprenticeship in following a modern moneyless monk named Daniel ‘Suelo’ Shellabargar. Finding few answers, he decided to travel the world with no exact destination. He worked as an English kindergarten teacher in China as he wrote Read of You, to help develop the poetic mentality of our children and “for our future to dwell in,” as he states.