You are here: Home / Fiction / Fantasy / Raptor by b.a.bostick 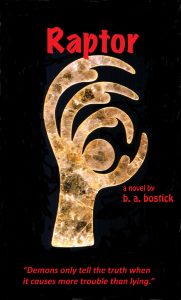 It’s the 21st Century. Demons have given up the old ways of dealing with humanity. For decades, ambitious demons have been taking on the guise of humans in order to insinuate themselves into positions of power and wealth. After all, why dabble in the black arts when greed, deception and politics can make the world ripe for take-over by other means.

Targeted Age Group:: YA to Adults

What Inspired You to Write Your Book?
I'm a great fan of both Urban Fantasy and old fashioned private detective stories. I decided to find out what would happen if I combined the two genres. It was great fun to write. I call my genre Urban Fantasy Noir.

How Did You Come up With Your Characters?
I wanted a superhero and a private detective to join forces to solve a case of mutual interest. The villains and other characters just evolved as the plot took off. Some are evil, some are weird and funny, others are brave and determined, or not at all what they seem to be.

Book Sample
The fog of smoke inside the bar was so thick Bishop thought he might need a lung transplant if he stayed too long. He could see a band on a small stage in one corner. The female singer had a sort of glitter-goth-metal-ska thing going with a screechy edge to it like bad wheel bearings. She was dressed in a purple prom formal with a fluffy net overlay, black, elbow high gloves and lace up leather boots with six inch heels. Her blonde hair was streaked with black and her eye makeup looked like she'd paid someone to punch her out and the bruises were three days old. Her back-up singers were shaped like bowling ball Barbies, long blonde hair, long limbs, and short, round bodies in pastel spandex. The lead guitar had six fingers on each hand and the drummer looked like a squid.
He decided not to look too closely at the people at the tables. It didn't take being a rocket scientist to know he wasn't in Kansas anymore.
Bishop followed Ariel to the bar. "T' Jon," Ariel said, sliding onto a stool next to a thin man in a fuchsia leisure suit, royal blue shirt and a yellow pocket handkerchief.
Bishop took the stool on the other side of the man and held up two fingers–the universal signal for two beers.
"Polyester," Ariel said, as if appalled. "Timmy! Are you robbing trailer parks again?"
"It's retro," Timmy Jon told her defensively. It's all the rage in some circles."
. . . of hell, Bishop thought .