You are here: Home / Fiction / Fantasy / Rajveer the Vampire by Barbara G.Tarn 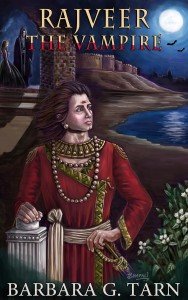 A “sun clan” warrior can never become a true child of darkness.
Turned into a bloodsucker by an ancient Celtic vampire, Rajveer, a proud Rajput warrior of a Suryavanshi clan in 14th century India, becomes almost invulnerable.
Immortal, he loses his family to war and time and travels through northern India, seeing history unfold. Threatened by both human wars and evil vampires, can he remain true to his sworn vow not to take human lives?
A vampire’s journey through centuries.
In this novel, Barbara G.Tarn combines her love for history (especially medieval) and fantasy. It’s the story of a vampire through the centuries that will appeal to both historical fiction readers and vampire lovers all over the world.

What Inspired You to Write Your Book?
My obsession with India and Bollywood actors and movies. I noticed many actors have very pointed canines that almost look like fangs. From there to creating my own vampire mythology it was an easy step. I had written only a short story about vampires some twenty years ago after watching and reading Interview with the Vampire… And last year I finally came up with my own version, even though the very first draft was actually a humor vampire story.
I ended up with two (for now, but there are more) kinds of vampires: the “western” ones who can feed without killing and turn their fledglings by making them drink their blood and the “Indian” ones who are more demonic, and their bite is either poisonous or transforms into one of them.

How Did You Come up With Your Characters?
At first there was my body-switching “witch”, Samantha, who wanted to find a “Desi vampire.” So I wrote her meeting with Rajveer and the end of the story. But then I started writing Rajveer’s story from his point of view, exploring his life through the centuries, and it became a more serious novel that required another kind of ending. He became more real with his sorrow and his fledgling (Shashank) and his sister-in-darkness (Kaylyn), and his story has now an open ending.
I am currently elaborating on two secondary characters – a Buddhist and a Jain turned turned into demonic bloodsuckers against their will – and will soon start on Kaylyn’s story. I already wrote how she became a vampire, but now I must tell her life up to when she goes to India and meets Rajveer and what happens when she leaves. And then I’ll write Shashank’s story, from the moment Rajveer turns him to the present.
This is probably going to be a series of vampires through centuries, but hopefully the books will be all standalone. And I’m not sure who else is going to be protagonist of a novel or a novella, although I have a short list…

Book Sample
And then Akshita rushed inside his room, eyes wide in fear. “Rajveer! I can’t find Charumati! Maybe she’s sick again?”
For the people around them, Charumati had been sick – much like he’d been. If Charumati wasn’t sleeping in her room, where was she?
Rajveer jumped to his feet and dropped the sword and the stone. He rushed to Charumati’s room, but the bed looked untouched.
Rajveer summoned the servants, asking if they’d seen the lady.
“She’s gone with the queen,” an old maid said. “I saw her in the procession at dawn.”
“What?” Rajveer couldn’t believe his ears. “She’s doing the jahuar?”
The woman nodded, fearful. “I tried to stop her, but she wouldn’t listen…”
Rajveer clenched his teeth. “Where are they?”
“The funeral pyre was lit within the great subterranean retreat.”
Rajveer could hear the men shouting a battle cry, ready to leave. He should go with them. But he must stop Charumati first.
He ran to the palace and tried to break into the underground chambers that were impervious to the light of day.
He hated the Suryavanshi traditions. The self-immolation of widows, or sati, like his mother and sister had done. And the mass suicide when there was no way out, like today. Women first, burned by the fire of the jahuar. Men next, fighting until death took them – and if they happened to survive the battle, they’d have to kill themselves.
Except he couldn’t kill himself. And he couldn’t understand why Charumati had gone with the queen. She was immortal, not invulnerable! If she fell asleep, she’d be burned to ashes! Why had she chosen death anyway? Had she faked love for him while she estranged herself from him even more until she preferred death to staying by his side?
“Charumati!” he called.
He took down the door and smoke filled his nostrils. The flames licked at his skin, making him jump backward. The women were eerily silent in the crackling of the fire.
“Charumati!”
“It’s too late!” Kaylyn grabbed his arm and pulled him backwards with unexpected strength before he entered the furnace. “Move away, Rajveer, she chose suicide!”
“But why?” Tears filled his eyes as he tried vainly to see his beloved through the flames.
“Because that was her choice.”
“You knew! Why didn’t you stop her?”
“It’s called free will, Rajveer. We talked about it for nights. She had to try what you went through – but then she couldn’t take it.”
“You should have stopped her! You should have told me! You…”
“You want to avenge her or not? The battle has begun,” Kaylyn replied sharply.
With a growl of anger, Rajveer freed his arm. With a last glance at the burning cavern, he ran back to his rooms to get his weapons and rushed out of the fortress, moving so fast that when the two armies met he was in the front line in spite of having passed the lintel-and-corbel Ram Pol gate last.
He’d literally flown down the serpentine way of the west main entrance, passing through all the gates, almost jumping over his fellow warriors. Ram Pol, Lakshman Pol, Jorla Pol, Ganesh Pol, Hanuman Pol, Bhairon Pol and finally Padal Pol, two centuries old with its lower part laid with large hewn stones, toughly coursed, and its parapet of false merlons.
With a war cry he attacked the Muslim soldiers, hungry for blood, literally biting off limbs or sucking lives while his sword danced around him, bringing death to anyone unlucky enough to be near him.
He weakened when the sun was at the zenith and slowed his slaughter, again dizzy with too much blood. He retreated to the shadow of the fortress’s walls and looked around. The saffron robes were lying in front of him, only a few remaining, quickly taken down by the sultan’s men.
“Time to retreat and save what’s left of your family.” Bran appeared near him with his blond hair shining in the light. He looked less pale than usual, and the blood pouring from the side of his mouth meant he must have drunk his fill too. Kaylyn also joined them, her bloody dagger in hand.
Rajveer raised his sword and glared at both. “Stay away from me,” he threatened.