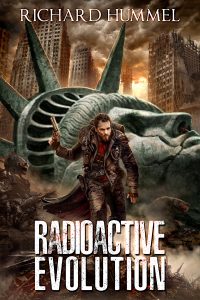 How far would you go to change humanity’s fate?

Jared Cartwright has spent the last two years delving into the twisted, scarred wastelands of an earth ravaged by nuclear war. The rich and powerful have taken to the oceans and skies on floating utopias, escaping destruction and leaving the rest of humanity to fend off the mutated creatures that roam the earth.

To face his new reality, Jared must become an apex predator if he hopes to survive. He must evolve beyond human limitations to confront those that left mankind to die.

Jared’s quest takes a new turn when he discovers dragons are real.

What Inspired You to Write Your Book?
The best way to sum it up is D. Rus and Vasiliy Mahenenka. These two Russian authors created books in a new genre called LitRPG, which falls under a more broad category called Gamelit. I devoured any and every book created by these two authors and quickly realized they were not alone in their endeavor. The series they created were translated from Russian to English, but it wasn't long before American authors started pushing their own series.

Since starting with the Play to Live series (D.Rus), I've read hundreds of books and dozens of stories on Royal Road. I started posing questions and conversations about plots and book directions in various groups and forums. Eventually, I got the idea to start keeping track of my ideas and instead of giving them away, write my own story. Herein, is born a writer (or at least a wannabe writer)… not a writer to grab a paycheck, and not even for the sake of a job. I am putting this first story together purely for my enjoyment and it has been a fun ride so far.

How Did You Come up With Your Characters?
I write as a "pantser", meaning everything is off the cuff. For the main character in Radioactive Evolution, I modeled much of the character after myself as it felt more natural. I was then able to take the liberty to expand beyond my natural inclinations with other characters and it helped to expand my experience. This was the first book…well, really my first attempt at any work of fiction ever so there was a lot of learning along the way.

Book Sample
Jared stood at the precipice of almost certain danger, the yawning black chasm simultaneously beckoning and repelling him. The last six months of exploration led him to this moment, and now he hesitated to follow through. For months he’d searched for evidence of others.
In a city this size he expected to find something. Remnants of a battle, bones picked clean by the many carnivorous creatures that roamed the area, or anything worth scavenging. However, the only evidence he’d found was a series of tags painted on the walls around the perimeter of New York City. Only one set of markings, distinct in their pattern, delved further into the streets of the once great city. It was these patterns he found himself following, stupidly assuming he’d find treasure at the end of the veritable rainbow. Except there was no leprechaun or pot of gold, only a staircase descending into utter darkness. A faded sign announced it as “Metro Tr…”
Tram? Train?
Jared shrugged. He didn’t know for certain, but he’d read about old means of transportation before the nuclear wars obliterated most of the planet.
Taut as a bowstring, his eyes and ears strained, Jared looked for any sign of predators. In a city this large, he was at the bottom of the food chain, and his only protection was his father’s Colt Peacemaker, a .45 caliber revolver. In the two years since he’d left
his home colony, it’d saved his life on more occasions than he could count. Absentmindedly, he reached down to finger the weapon in its holster, contemplating if he dared risk the underbelly of the city.
Six rounds…
Agonizing over the decision, Jared flicked his gaze to the corner of his vision. A holographic outline of his body floated, where a countdown timer showing a little more than two months remaining. It represented how many nanites he had left before he needed to use an injector and replenish his stores. These microscopic machines were the only thing preventing humans from dying excruciating, radioactive deaths. He hoped the trail leading down would end at the body of whomever left all the tags, and that they had some of the life-giving injectors on them. On the other hand, it was a gamble and he had no way to know for sure without making the trip.
What should I do…